Monty Don’s wildlife quest: ‘If everybody does something small, you end up with big action’

The Gardeners’ World presenter talks about appreciating wildlife during lockdown and how gardeners can do their bit for the planet. 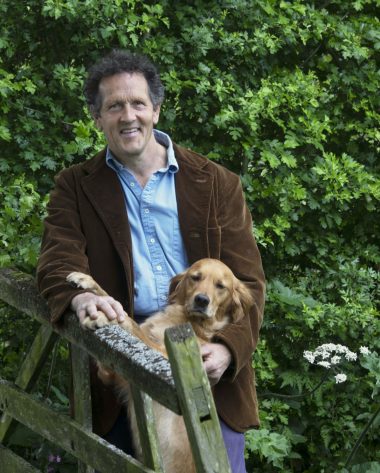 Gardening guru Monty Don had plenty of time during lockdown to admire the wildlife in his garden at Longmeadow, in Herefordshire, while filming much of the latest Gardeners’ World series virtually.

“I’ve hardly left my garden since early March,” he reflects. “Lockdown hugely affected the filming of Gardeners’ World, but it hasn’t stopped it. We haven’t had a film crew here since the end of February.

“For about a month we filmed it ourselves and since then, the garden has been laid out with miles of cable and equipped with robot cameras. I mic myself up, so everything you see of me is just me alone in the garden speaking to robots.”

He’s also been able to finish two books – My Garden World, about his connection with wildlife, and American Gardens, written with Derry Moore, tied into his recent TV series.

My Garden World features many of his detailed observations about wildlife. “I’ve always been fascinated by birds, wild flowers and wild animals, but particularly birds,” he explains. “Throughout my adult life in the garden, the fellow travellers – the frogs, the beetles, the ladybirds, even the aphids and the worms, as well as the more spectacular birds like sparrowhawks – have been a rich part of my gardening experience.

“That also proved to be very true in lockdown. One of the things we’ve noticed on Gardeners’ World is that more and more people are showing an interest in the wildlife in their garden, not necessarily rare wildlife.

“It’s just as fascinating seeing a robin as it is seeing a peregrine falcon, in its own way,” he muses.

His favourites, he admits, are birds of prey. “I’ve always been completely fascinated by them. In my lifetime, almost all birds of prey have increased hugely, which is one of the success stories. There was a disastrous decline in the Fifties and Sixties, but they’ve recovered very well, with the exception of the kestrel.

“But I’m now seeing birds of prey that I dreamed of seeing when I was in my 20s. Three days ago a peregrine falcon circled around my garden. That was unimaginable 40 years ago.

“Above the farm (he also has a small farm 30 miles from Longmeadow in the Black Mountains of Wales) we watch hen harriers, and there are only [thought to be] 600 [nesting] pairs in [the UK], so I feel privileged, blessed.”

Of course, most of us may not be so lucky to see these majestic species, but we can take pleasure in the more common wildlife, and Don is now urging gardeners to do their bit to attract all creatures great and small to their gardens.

“Instead of trying to attract one type of animal, the secret is to have a rich and varied garden with lots of cover, plenty of shrubs, hedges and trees, seeds and pollen, so you have insects, birds that eat insects, and birds that eat birds – and you have a chain of life.

“One of the points of the book is that even the most humble back garden can do that,” he insists.

Don remains optimistic about the future of wildlife in our gardens, having seen the organic movement grow in the last 50 years, and a trend towards more naturalistic planting.

“We have an environmental crisis that is underway – it’s too late to stop it – but the garden is a way that ordinary people can connect with that crisis and do something about it.

“It’s fine for politicians and campaigners to have big talk about saving the planet – let’s plant trees, let’s all go vegan – but it’s pie in the sky. Most people can’t relate to that. But you can relate to having a little bit of long grass in your garden, or a little pond.

“If everybody does something small, you end up with big action.”

“It can literally be a little half barrel,” he says, “but having some kind of pond will attract a range of wildlife, from frogs and dragonflies, but also insects which will in turn attract birds and bats. It will create a chain that you will help.”

“Long grass provides fantastic cover. Not only can you grow wild flowers in it, which is great for pollinating insects, but also it’s good cover for insects and small mammals like voles and shrews, frogs and all kinds of smaller life.”

“Have a few heaps of leaves around, or gather up some sticks and put them in a corner, which will provide cover. If your garden is big enough to grow hedges or shrubs or trees, so much the better.”

He continues: “A very simple little pond, a patch of long grass that you leave uncut, just cutting it once a year, and a little untidiness, is quite easy.”

“Grow plants for pollinators in pots; types which bees and other insects will come to. Even with a window box you can be part of that.”