The new polymer £50 note is coming on 23 June 2021 and features the mathematician Alan Turing.

It will be the last of the Bank’s collection to switch from paper to polymer and in keeping with Alan Turing’s work, the note is said to be its most secure yet. 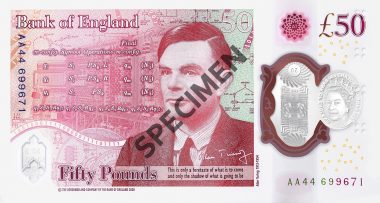 Alan Turing provided the theoretical underpinnings for the modern computer. While best known for his work devising code-breaking machines during WWII, Turing played a pivotal role in the development of early computers first at the National Physical Laboratory and later at the University of Manchester.

He set the foundations for work on artificial intelligence by considering the question of whether machines could think.

Turing was homosexual and was posthumously pardoned by the Queen having been convicted of gross indecency for his relationship with a man. His legacy continues to have an impact on both science and society today.

Alan Turing’s portrait on the new note is based on a photo taken in 1951 by Elliott & Fry which is part of the Photographs Collection at the National Portrait Gallery.

The design on the reverse of the note celebrates Alan Turing and his pioneering work with computers. It features: 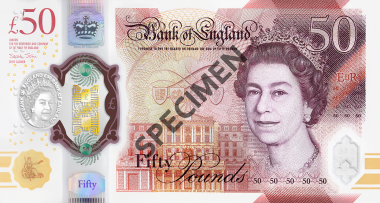 The work of Alan Turing, who was educated in Sherborne, Dorset, helped accelerate Allied efforts to read German Naval messages enciphered with the Enigma machine. His work is said to have been key to shortening World War Two and saving lives.

Less celebrated is the pivotal role he played in the development of early computers, first at the National Physical Laboratory and later at the University of Manchester.

In 2013, he was given a posthumous royal pardon for his 1952 conviction for gross indecency. He had been arrested after having an affair with a 19-year-old Manchester man, and was forced to take female hormones as an alternative to prison. He died at the age of 41. An inquest recorded his death as suicide.

Andrew Bailey, the governor of the Bank of England, said:

“He was a leading mathematician, developmental biologist, and a pioneer in the field of computer science.

“He was also gay, and was treated appallingly as a result. By placing him on our new polymer £50 banknote, we are celebrating his achievements, and the values he symbolises.”

Alan Turing is perhaps best known for his code breaking work during World War 2, and in recognition of this the Bank of England have collaborated with GCHQ to design a series of puzzles, based on the Turing £50 note design. Test your code breaking skills where you will have to solve 11 puzzles, each based on one of the features on the note. Solve all 11, and you will have all the clues you need to solve the final puzzle. Good luck!

New campaign urges public to get tested twice a week

Remote working: Where to set up desk space overseas

Sign the official Book of Condolence for Prince Philip