“I rang up the county council and said I think I’ve found a dinosaur” explains Joe Davis, who works at Rutland Water Nature Reserve after discovering Britain’s largest ‘Sea Dragon’ in the Midlands.

The fossilised remains of Britain’s largest ichthyosaur, colloquially known as a ‘Sea Dragon’, has been discovered at the Rutland Water Nature Reserve, owned and run by Anglian Water.

It is the biggest and most complete skeleton of its kind found to date in the UK and is also thought to be the first ichthyosaur of its species (called Temnodontosaurus trigonodon) found in the country. 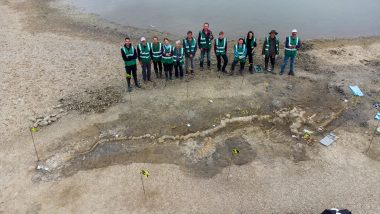 The ichthyosaur was discovered by Joe Davis, Conservation Team Leader at Leicestershire and Rutland Wildlife Trust, who operates the nature reserve in partnership with the water company, during the routine draining of a lagoon island for re-landscaping at Rutland Water in February 2021.

After spotting something strange poking out of the mud, Joe explained to BBC News:

“I rang up the county council and said I think I’ve found a dinosaur.

“I looked down at what seemed like stones or ridges in the mud and I said this looks a bit organic, a bit different. Then we saw something that looked almost like a jawbone.”

According to Mr Davis the council said:

“We don’t have a dinosaur department at Rutland County Council so we’re going to have to get someone to call you back.”

A team of palaeontologists were quickly brought in for a closer look and they confirmed the find wasn’t actually a dinosaur but an ichthyosaur.

Ichthyosaurs were a specialised group of marine reptiles that lived in the water whilst dinosaurs walked on land. Approximately 180 million years old and, with a skeleton measuring around 10 metres in length and a skull weighing approximately one tonne, it was also the most complete large ichthyosaur ever found in Britain.

“The find has been absolutely fascinating and a real career highlight, it’s great to learn so much from the discovery and to think that this amazing creature was once swimming in seas above us, and now once again Rutland Water is a haven for wetland wildlife albeit on a smaller scale!”

Ichthyosaurs first appeared around 250 million years ago and went extinct 90 million years ago. They were an extraordinary group of marine reptiles that varied in size from 1 to more than 25 metres in length, and resembled dolphins in general body shape.

The fragile remains of the huge skeleton were carefully excavated in August and September 2021 by a team of expert palaeontologists assembled from around the UK, in partnership with Anglian Water, Rutland County Council and the Leicestershire and Rutland Wildlife Trust.

The discovery is not the first at the Anglian Water reservoir, with two incomplete and much smaller ichthyosaurs found during the initial construction of Rutland Water in the 1970s. It is however the first complete skeleton to be discovered there.

“Rutland Water has a long list of previous, fascinating archaeological and palaeontological discoveries, but none more exciting than this.

“As a water company we have a role to bring environmental and social prosperity to our region. Which is why the correct preservation and conservation of something so scientifically valuable and part of our history, is as important to us as ensuring our pipes and pumps are fit and resilient for the future.

“We also recognise the significance a find like this will have for the local community in Rutland. Our focus now is to secure the right funding to guarantee it’s legacy will last into the future.”

In order to preserve the precious remains, Anglian Water is seeking heritage funding. This will also ensure that it can remain in Rutland where its legacy can be shared with the general public. 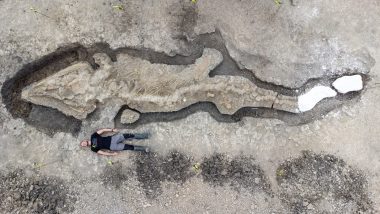 Dr Dean Lomax, a palaeontologist and a Visiting Scientist affiliated with the University of Manchester, who has studied thousands of ichthyosaurs and named five new species in the process, said:

“It was an honour to lead the excavation. Britain is the birthplace of ichthyosaurs – their fossils have been unearthed here for over 200 years, with the first scientific dating back to Mary Anning and her discoveries along the Jurassic Coast.

“Despite the many ichthyosaur fossils found in Britain, it is remarkable to think that the Rutland ichthyosaur is the largest skeleton ever found in the UK. It is a truly unprecedented discovery and one of the greatest finds in British palaeontological history.”

Dr Mark Evans of the British Antarctic Survey and a Visiting Fellow at the University of Leicester said:

“I’ve been studying the Jurassic fossil reptiles of Rutland and Leicestershire for over twenty years. When I first saw the initial exposure of the specimen with Joe Davis I could tell that it was the largest ichthyosaur known from either county. However, it was only after our exploratory dig that we realised that it was practically complete to the tip of the tail. Rutland’s motto, “Multum in Parvo”, translates as “Much in Little” so it is fitting that we’ve found Britain’s largest ichthyosaur skeleton in England’s smallest county. It’s a highly significant discovery both nationally and internationally but also of huge importance to the people of Rutland and the surrounding area.”

“The block containing the massive 2m-long skull weighs just under a tonne (comprising the fossil, the Jurassic clay in which it lies, and the encasing plaster of paris and wooden splints). The block containing the body section weighs about a tonne and a half. It’s not often you are responsible for safely lifting a very important but very fragile fossil weighing that much. It is a responsibility, but I love a challenge. It was a very complex operation to uncover, record, and collect this important specimen safely.”

The team of palaeontologists will continue to work on the research and conservation of this significant scientific discovery, with academic papers to be published in the future.

The excavation of the remains will feature on BBC Two’s Digging For Britain tomorrow (Tuesday at 8pm). 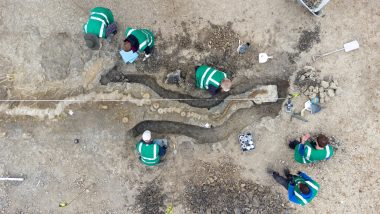