A MYSTERIOUS new roadsign points motorists towards a part of Rugby that does not exist.

It points down the under-construction Houlton link road towards the non-existent suburb of ‘Dunsmore’ – instead of the new suburb after which the road itself is named.

The sign, which is at the bottom of Vicarage Hill in Clifton Road, has been described by an Observer reader as ‘bizarre’ and ‘an embarrassment’.

The mistake is compounded by the fact that the suppliers responsible managed to get the right name on another new sign just yards away, at the top of Butler’s Leap. 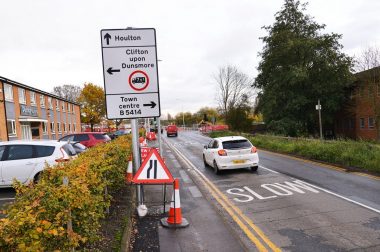 Dunsmore is in fact a large region of countryside and villages stretching between east Coventry, Rugby and north Leamington, including Ryton-on-Dunsmore, Stretton-on-Dunsmore and Clifton upon Dunsmore.

And more problems have emerged at the Houlton link road’s junction with Hillmorton Lane, where motorists have reported temporary traffic lights regularly stuck on red.

On social media during the last week, Rugbeians have said the lights are causing delays, and some drivers have been jumping red lights.

One driver said they were stuck in a 20-minute tailback at the junction, while another said the lights were only letting two cars through at a time.

On social media, County Councillor for Hillmorton Yousef Dahmash said he had raised the issue with Warwickshire County Council (WCC), who told him: “The temporary traffic signals at Hillmorton Lane and the Link Road are not working; have asked Balfour Beatty to attend this fault.”

The following day, The Observer put in an enquiry to WCC, to which it responded four days later.

A WCC spokesperson said: “The temporary traffic lights at the Hillmorton Lane junction are currently operating as programmed. They are maintained and checked twice daily by council officers and we will continue to do this while they are in operation.”

Regarding the roadsign, they added: “The current road sign is incorrect and we are working with the contractor to rectify this with a new sign that will read ‘Houlton’.

“In the meantime, the current sign will be covered to avoid any confusion. There will be no cost to the council to rectify the sign as it was a supplier error.”

The Houlton link road is already unpopular with motorists before it has even opened. In February, Hillmorton Lane reopened after work to install the new junction was completed – but it closed on the same day after motorists compared its new gradient to that of a roller-coaster.

And when it opened again in April, drivers said they were still scraping the bottom of their vehicles on the ‘rolling hills’ road.

According to the Houlton website run by master developers Urban & Civic, the Houlton link road is due to be completed by the end of this year.

One-way system to be scrapped this weekend

Patient died after tumour was ‘torn’ from his brain during surgery

Permission granted for development at site derelict for 12 years

Any cookies that may not be particularly necessary for the website to function and is used specifically to collect user personal data via analytics, ads, other embedded contents are termed as non-necessary cookies. It is mandatory to procure user consent prior to running these cookies on your website.