Lynda La Plante: ‘I felt vulnerable and fragile for so long’

After a tough few years with her health, coming through the other side feels like a ‘rebirth’ for crime writer Lynda La Plante. By Gabrielle Fagan. 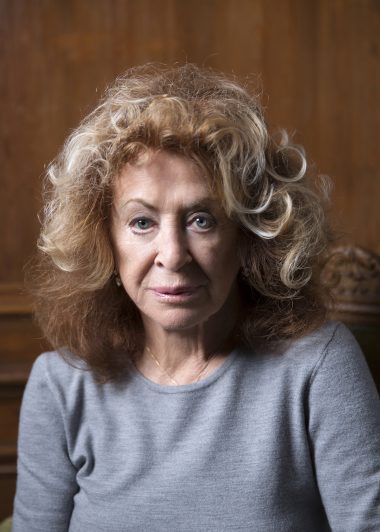 “Worry and fear’s a constant really, isn’t it, when you get to the dreaded teenage years,” she says, talking on the phone from her Surrey home.

“I’ve just been out with my son for a driving lesson and, put it this way, that was interesting. He’ll say, ‘I was a bit slow on indicating there’, and I’ll go, ‘Errr, actually you didn’t indicate at all!’ It’s a bit testing,” she adds, roaring with laughter.

Lorcan, La Plante’s 17-year-old son, is clearly the light of her life. The Liverpudlian, now 77, adopted him as a baby when she was 59.

“I suffered years of infertility and had so many drugs to try to give me a baby, they provoked an early menopause when I was only 32,” recalls the writer, who parted from her American musician husband, Richard, in 1996.

“After trying to adopt for years, I finally thought it was over for me and babies, and then I got Lorcan. He’s a lovely, kind, generous boy, who I think will become an inventor. He’s brilliant at electronics and – thank goodness because I’m hopeless – computers, and he flies drones. During lockdown, he made hospital masks 24/7, churning them out on his 3D printer. I was so proud of him.”

While she’s hailed as the ‘Queen of Crime Writing’, Lorcan shies away from his mother’s limelight.

“He’s very private,” La Plante says. “I wanted him to have his photo taken when he did the masks but he doesn’t even like being in the background when I do my online video chats about my books. I say, ‘Look at Liz Hurley’s son, Damian, he doesn’t mind having his photo taken!’ He just firmly says, ‘No, Mother’. He won’t have any of it!”

Adoption is a theme in La Plante’s latest book, Buried – the first in a series, which, 25 years on from Widows [made into an Eighties TV series and a film in 2018], finally reveals what happens to Dolly Rawlins and her gang.

It also launches a complex new hero, young Detective Constable Jack Warr. “The basis of the story is Jack’s search for his [biological] father, but I also wanted to show the love he received from his [adoptive] mother and father. That abiding love helps give him strength and a foundation for the rest of his life,” La Plante says.

He “doesn’t have the usual baggage, divorce, or personal problems like alcohol that are so familiar. Instead, Jack is fun, a bit erratic and never in the right place at the right time, and very modern – his left hand is his mobile phone”.

Her other new book, Blunt Force, is the latest in a series focusing on the early life of Jane Tennison, before she became the tough character made famous by Helen Mirren in Prime Suspect.

La Plante, who was a RADA-trained actress before she turned to writing, says the plot – the murder of a theatrical agent – sprung from a conversation with an LA detective, about the struggles of his team investigating the murder of a movie star.

“They found it really hard getting to the truth because actors are, of course, so used to performing, and their ability to fake and ‘lie’ if it suits them is unbelievable. I had a ball doing it, as I know the show-business world so well myself, and I thought: ‘I’ll use that’,” she says gleefully.

That her prolific output has continued unabated – she’s had 38 international bestsellers in a stellar career spanning more than 40 years – is remarkable considering the recent hurdles she’s faced.

Three years ago, she began suffering crippling neck pain, and then lost her sight two years ago following an eye operation, which at first left her blind. She’s since regained partial vision, so has to dictate her books to secretaries and laboriously proof-read them using a magnifying glass.

“I pace up and down acting out the story and give all the characters their own voices, which can be a nightmare for the people typing it up, but it brings it alive to me. It helps get over the hurdle of not typing it myself, which I so loved to do,” she says wistfully.

“Losing my sight was terrifying, and I feared at one point it would never return. What’s so hard to take is that it really wasn’t necessary,” La Plante adds. “I had only mild cataracts but really was just fed up with losing reading glasses and having to carry them around.”

There has been slow improvement over time. “I have glasses with big thick lenses and enlarged print on the computer, but can’t use it for any length of time as my eyes get too sore. I used to fall a lot and negotiating steps is still worrying, but I can drive short distances, although not at night or in bright sunlight,” she explains.

After some unsuccessful surgeries, her neck problem was finally resolved not too long ago.

“I felt vulnerable and fragile for so long, and in such pain all the time with my eyes and neck – I couldn’t even sleep. It was like living a nightmare,” she confides. “It made me feel very, very old. But I just had to get on with it because I’m the breadwinner.

“I hate ageing with a vengeance, mainly because I want to be around for as long as possible for my son, but now I actually feel incredibly youthful,” La Plante adds. “I feel I’ve come out the other side of all this and it’s like a rebirth.”

She’s still as passionate as ever about her work – she relaxes by watching true crime documentaries, which Lorcan also enjoys – and is continually researching.

“I love exploring the light and the dark that everyone has within them, but only some people reach into what can be evil. I like delving into what triggers that,” she says, of the painstaking process to create each book.

She’s the only lay person to be admitted to the Chartered Society of Forensic Sciences.

“I research and talk to criminals, police and scientists before I write, and then do a big edit when I’ve finished rechecking everything. If, for instance, a forensic expert tells me the blood spattering after someone’s throat was cut wouldn’t spray in the direction I’ve written, I change it. I never take dramatic license.”

And while she may be one of the UK’s most respected writers, she has no truck with complacency. “You can’t trade on your name. You’re only as good as your last book,” she declares. “I’m obsessive about keeping up the pace. There’s a lot of people with sharpened pencils out there, ready to take your place if you don’t.”

Her feisty determination – she says “rejection doesn’t mean no” is the best advice she’s ever received” – has pulled her through the tough times.

“I have a very full life and a happy disposition if you let me be, but if you don’t, the other side of me will rear up and I will fight you,” she says.

“I can be quite tough and a bit of a street-fighter, if there’s something I feel strongly about. Small-mindedness or lack of generosity will spark in me such a rage – out comes the Liverpool background!”

And with characteristic humour, she jokes: “For instance, anyone trying to take my HRT patches off me had better watch out!”