UNIQUE artwork will add more colour to a nature trail which runs through Rugby.

Rugby Rotary Club has unveiled plans for a new Railway Art Heritage Trail as part of an ongoing centenary project to upgrade a section of the Great Central Walk.

The club has applied for £15,000 of Arts Council funding for the trail, which will see commissioned local artists collaborating with schools in a competition to produce artwork, interpretation boards and murals.

Three new bespoke benches, funded by The Rugby Group Benevolent Fund and designed by Cawston artist and former Rotarian Eric Gaskell, have already been commissioned and will be installed in the coming weeks. 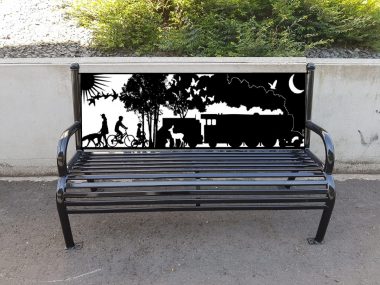 Benches designed by Cawston artist and former Rotarian Eric Gaskell will be installed at Great Central Walk in the coming weeks.

Eric’s design for the back of the bench incorporates trains, pedestrians, a cyclist and wildlife.

Eric, who will also be one of the competition judges, said: “I was delighted to devise and draw up the design for the new benches as well as putting forward ideas to involve local schoolchildren and artists to complete the project.

“The Art Trail is a project that will bring together a variety of age groups, allowing everyone to be part of something that will hopefully be around for many years.”

Rugby Rotary Club is working with Rugby Borough Council and Warwickshire Wildlife Trust (WWT) to upgrade the section of the former railway line between Hillmorton Road and Abbey Street.

When it ceased use as a railway in 1965, the council handed over the lease to WWT which now maintains the section south of Hillmorton Road – but they don’t have the resources to manage the northern section.

Chris Worman, Rugby Borough Council’s Parks and Grounds Manager, said: “One of the council’s key objectives is ensuring our green spaces are places where people want to be. By working in partnership with the Rotary Club we can help improve the visitor experience to areas such as Great Central Walk whilst also proving more volunteering opportunities for local residents.

“The benches provide a place to sit and relax – and the unique design gives users of the Great Central Walk the opportunity to reflect on the past industrial use of the area whilst also recognising the natural environment it is today.”

Plans also include interpretation boards, to be designed by local blacksmiths, in a style echoing the traditional British Rail signs and explaining the history of the Great Central Walk (GCW).

Rugby Rotarian and GCW project leader Laurence Wilbraham said: “We will soon be seeking a number of local artists in areas such as metalwork, woodwork, sculptors and graffiti who would be appointed to work with a particular local primary or secondary school to create their piece of artwork for the trail. We want people to use their own ideas and imagination and we’re open to a wide variety of artworks.

“It could be using recycled materials or incorporating engineering – in line with Rugby’s engineering history – and some murals on the walls of the bridges. We want to provide proper murals that will echo something about Rugby itself.”

Rugby Rotary Club is now more than half way through its four-year project to enhance the southern section of the Great Central Walk, including the removal of undergrowth and trees, improving the Sun Street Play Area, creating a wild play area, providing signage and, subject to community involvement, the provision of a community garden or orchard.

The first phase of the Art Trail, laying nearly 200ft of track, is underway thanks to the donation of rails and sleepers by Network Rail – and the hard work of Rotary and WWT volunteers, as well as members of the public.

Some volunteers have even been specially trained in strimming and hedge-laying for the project, which has managed to continue despite lockdowns – which, says Laurence, have brought the value of the nature trail into sharper focus.

He added: “The Great Central Walk is one of Rugby’s best kept secrets, which was only really rediscovered by people during the first lockdown, particularly when Draycote Water was closed.

“It’s also had the net result of reducing incidents of anti-social behaviour. By making it more open and visible from the roads, areas are much more observed than they used to be, coupled with the increasing usage.

“To mark our centenary, Rugby Rotary Club members wanted to do something that would raise both the profile of the club and of Rotary, would provide long term benefits for the people of Rugby and involve volunteering and young people as well as doing something environmental.

“This is the largest and longest project we’ve ever been involved in and so far the feedback we’ve been getting from everyone who uses the walk is extremely positive.”

Visit www.https://tinyurl.com/7qodozzh for more information about the Great Central Walk project and Rugby Rotary Club, or to volunteer.