A BEREAVED mum’s campaign to bring an ambulance station and an A&E department back to Rugby and install more Publicly Accessible Defibrillators (PADs) across the town is gathering strength.

Naomi Rees Issitt’s 18-year-old son Jamie ‘Jay’ Rees died in January after he had a cardiac arrest in the early hours of New Year’s Day. The nearest ambulance, in Coventry, took over 17 minutes to reach him.

To raise awareness of her campaign, Naomi led 17 other women on a 17.3km walk – one kilometre for each minute it took for an ambulance to reach Jamie – from his home to Rugby College, where he spent many years and where the first of the defibrillators was installed in his memory.

And another defibrillator in Jamie’s name has been unveiled at Ashlawn School where Jamie studied. 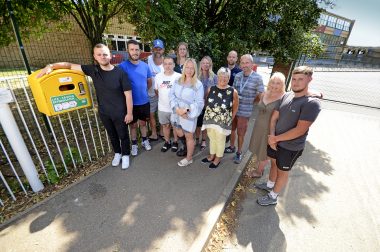 Naomi said: “It’s around the corner from where Jamie collapsed, so it was a really important one for us.

“Obviously every single defibrillator is important to us, but this was the first one we planned after losing our boy as it was to be located within reaching distance for Jamie’s friends, had it been there on that awful night.

“Sadly there was only an internal defibrillator located at Ashlawn, which could not be accessed in the middle of the night, or during school holidays.

“We had to have some groundwork and electrical work done – but the people of Rugby rallied and did it all for us, so we’ve managed to get it installed in time for the summer holidays.” 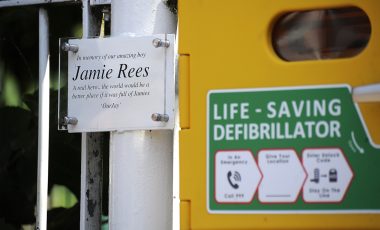 The defibrillator was unveiled at a ceremony attended by many, including Jamie’s friends who were with him and gave him CPR when his heart stopped – which meant “the absolute world” to Naomi and her family.

She led the walk to raise awareness of delays in ambulance response times which she says are ‘proving catastrophic’ since the Rugby Community Ambulance Station – the base of the only ambulance which started and ended its shift in Rugby – was closed by West Midlands Ambulance Service (WMAS) in 2021.

She said: “Had there been ambulances stationed in Rugby, or transferring patients to an A&E department in Rugby, Jamie could have been reached in less than seven minutes, increasing his chance of survival by more than 56 per cent.

“Jay would have had a chance of survival and our beautiful boy may still have been here with us today.

“Rugby’s population is fast growing. People are dying waiting for ambulances. The town is too big not to have emergency services. It simply cannot carry on. More lives will be lost.

“We need to show just how much this means to the people of Rugby. Something has to change.”

A WMAS spokesperson said delays in getting to patients in Warwickshire are due to ‘long hospital handover delays’, with crews working ‘flat-out’ to reach patients as quickly as possible.

They said: “The pressures we are seeing in health and social care lead to long hospital handover delays. The result is that our crews are delayed reaching patients, sometimes by many hours.

“We are working incredibly hard with all of our NHS and social care partners to prevent these delays, looking at new ways to safely hand over patients quickly so that our crews can respond more rapidly.

“While the service is under very considerable pressure, the staff in our control rooms and our operational ambulances are working flat out to reach patients as quickly as possible.”

Naomi has helped to raise over £23,000 to install external accessible defibrillators across the town, and her petition to bring A&E and ambulances back to Rugby has attracted over 9,000 signatures so far.

A fund-raising Bingo Night will take place at Newbold Rugby Club on Friday August 5 from 7pm. Prizes include Apple Watches.