A RENOWNED Birmingham graffiti artist has claimed responsibility for a Banksy-style mural which appeared in Rugby.

The artist, known as ‘Itchers’, told The Observer he painted the pictured mural – which has been stolen overnight – at the former Rugby Hand Car Wash in Newbold Road.

It was first spotted on Monday evening (February 12) by Observer reader Terry Brown – causing much speculation that it was painted by Banksy, the anonymous graffiti artist whose distinctive stencilled street art has appeared throughout the world.

But at around 10pm on Tuesday it was removed by a group of people using power tools and taken away in a van.

Sutton Coldfield-based Itchers, 26, said he wanted to venture out to new territory, having been graffitiing the streets of Birmingham for the past 10 years.

He said: “It was my first time in Rugby. I’ve done a few others outside Birmingham but I never really claim them. This is probably only the fourth time that I’ve admitted to a piece.”

He said the meaning behind the mural was deliberately vague. 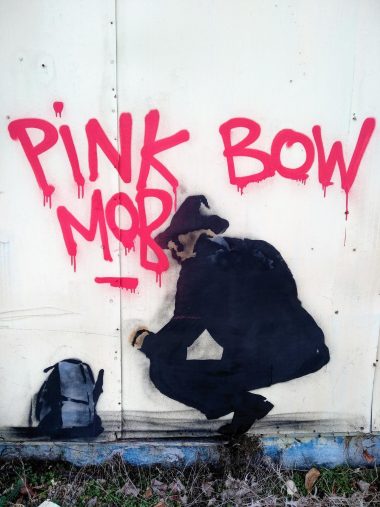 Itchers told The Observer his mural flatteringly depicts Cancer Research as gangsters in their fight against one of the biggest killers in the world.

“People didn’t understand this one so that’s one of the reasons I came forward.

“It sounds sort of crazy but the only real gangsters in the world are Cancer Research, who are fighting one of the biggest killers in the world. That’s why I wrote ‘Pink Bow Mob’. I was trying to focus on the positive of it, because obviously it is a positive thing.

“I also had it in the back of my mind that it also could just be something random. It could mean anything to anyone.”

He said he was not happy that the mural had been taken away just over a day after he painted it.

“It’s sort of crazy but it happens all the time with street art,” he said. “It belongs on the street and it’s not right that it gets moved.

“I wanted it to run a bit longer than a day. I do it for people to appreciate, and when it’s taken away it does annoy me.

“I’m curious as to where it’s gone. I’d like to know what they’ve done with it – I’m guessing they thought it was a Banksy.”