Cheers! Landlord celebrates 35 years at the heart of his community

GLASSES have been raised to the veteran landlord of a Leicestershire pub as he celebrated 35 years behind the same bar.

Brian Priest has been calling the shots at The Chequers in Swinford since he moved in with his late wife Chris back in 1987 – and has turned the pub into the heart of the community.

Brian, 67, became a publican at the age of 21 when he took over the reigns at The Shakespeare in Rugby – where Asda now stands – from his father George Priest.

At The Chequers, he has supported many local organisations by hosting fund-raising events – raising thousands of pounds for local and national charities over the years – and provided a venue for skittles, darts, dominos and crib teams. 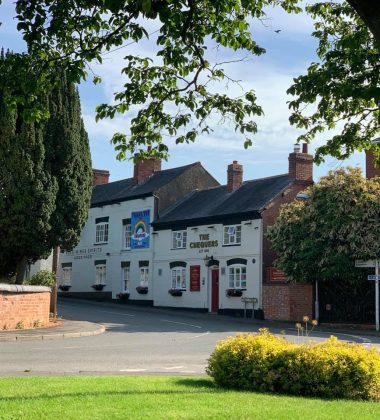 Brian has turned the pub into the heart of the community.

The avid Leicester City fan famously painted his pub blue and white when the Foxes won the league in 2016, he rolled a barrel three miles with locals to celebrate 30 years in the job, and he had a life size statue of himself presented to him from BT Sports when they named him Pub Manager of the Month in 2017.

Brian has also featured on TV programmes such as Chrisley Knows Best, has hosted quirky events such like worm-charming championships, and brings the community together in the summer for a series of Gigs in the Garden.

And although the 35th anniversary barrel-roll has been postponed due to the pandemic, Brian is still enjoying the milestone.

He said: “It’s been a rocky road at times – it’s not an easy business to run, it’s a lifestyle choice.

“Working all hours every day without a day off is no mean feat, but the friendships and company is a huge reward. We have fantastic support from near and far, regulars who have been coming in for years. The staff we have are superb and if we come up with daft ideas they’re straight onboard.