A COUNCILLOR has slammed the ‘mindless’ arsonists who torched play equipment at Millennium Green – the latest incident in a spate of vandalism and anti-social behaviour at Rugby’s parks and open spaces.

The arson attack at the park in Craven Road took place over the weekend, causing extensive damage to a wooden climbing frame. Planks of wood and a petrol can were found at the scene.

Rugby Borough Council, which has reported the attack to the police, has now fenced off the park’s play equipment until repairs can be carried out. 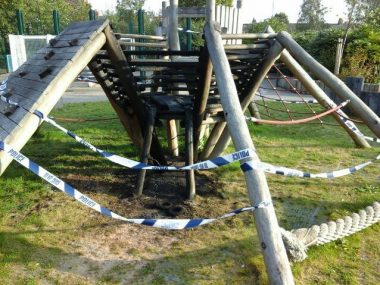 Play equipment at Millenium Green has been cordoned off following the arson attack.

In recent weeks the council has dealt with an increasing number of arson attacks, vandalism and anti-social behaviour at the borough’s parks and open spaces.

Arsonists set fire to a wheelie bin on the multi-use games area at Jubilee Street Recreation Ground, damaging the tarmac, while broken glass has become a significant issue at parks and play areas across the borough.

And the council’s parks and grounds team has repeatedly had to clear human faeces from Caldecott Park in the town centre, together with discarded toilet roll.

The council’s environment and public realm spokesman Coun Howard Roberts said the spate of vandalism and anti-social behaviour was putting extra pressure on resources at a time when the council was playing a vital role in dealing with the coronavirus pandemic.

He said: “Since the start of lockdown our parks and open spaces have proved a lifeline for many of our residents, so it’s frustrating the actions of a mindless few deprive the majority of a safe and welcoming environment.

“Throughout our response to the pandemic, we’ve urged our residents to do what’s ‘Right for Rugby’ and it’s been heartening to see our communities come together during these difficult times.

“It makes such behaviour from a selfish minority hard to understand and even harder to tolerate, and we’re determined to stamp it out and catch the culprits.”

PC Sharon Smyth said: “Thankfully no one was hurt as a result of this incident but senseless crimes such as these will not be tolerated as they can have devastating consequences.

“The fire caused extensive damage to the play area which has sadly meant that local children won’t be able to use it until it has been repaired which could take some weeks.

“While no arrests have been made, investigations are ongoing and we would appeal to anyone who may have been in the area at around the time of the fire who may have seen something suspicious to please get in touch.”

Anyone with information about the arson attack should call Warwickshire Police on 101, quoting crime number 23/40338/20, or the confidential Crimestoppers hotline on 0800 555 111.