THE PARENTS of a courageous Rugby schoolgirl diagnosed with two different types of cancer have released a video showing the emotional moment she rang the ‘end of treatment’ bell for the second time.

This time last year, seven-year-old Holly Hughes from Cawston was the face of TK Maxx’s Give Up Clothes for Good campaign in the region, in support of Cancer Research UK for Children and Young People.

As she packed bags for the appeal, proud parents Christina and Chris had no idea that, six months later, their bright happy little girl would be faced with cancer for a second time.

Holly’s initial two-year treatment plan for acute lymphoblastic leukaemia came to an end in August 2018. Due to improved research and treatment, her parents were told the chances of a new leukaemia developing in the future were just one per cent.

But in February this year, Holly was diagnosed with Acute Myeloid Leukaemia – a completely different form of the blood cancer that affects the bone marrow and requires a life-saving stem cell transplant.

After six months in hospital which saw her lose her hair and fight off numerous infections, Holly has rung the end of treatment bell for a second time. 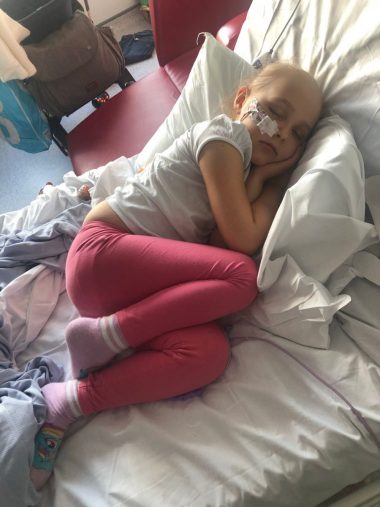 Holly spent six months in hospital, during which time she lost her hair and fought off numerous infections.

She’ll still not out of the woods completely – it takes a full year to recover from a stem cell transplant – but she’s doing so well that she has chosen to front the Give Up Clothes for Good appeal for the second year in a row. The campaign helps fund life-saving research into children’s and young people’s cancers.

“We’ve been through the hardest time,” said Christina, who had to juggle hospital stays with her husband Chris and looking after their two other children – Harry, three, and Summer, aged 14 months.

“When we got the news it was another cancer, I was completely shaken. I had to tell her she was going to have to return to hospital and she asked if she was going to lose her hair again. That was really quite emotional.”

Holly was readmitted to Birmingham Children’s Hospital for tests after her parents noticed new bruises on her legs that weren’t fading quickly enough.

“During the first round of treatment she got a blood clot on her arm and developed a lung infection,” added Christina. “At one point in March her temperature was so high she was hallucinating. It was like being given blow after blow.

“The first time she had cancer, Chris and I were both able to be with her in hospital but, with Covid restrictions and two other children, this was a hundred times worse. We were able to spend two hours together with her on her birthday in June but that was all.”

Holly underwent a stem cell transplant in May after a donor was found in America.

“She’s been so brave throughout it all,” said Christina. “So sensible and grown up. Even though she spent her seventh birthday in hospital she said it was the best one ever.

“Now she’s back at home it already seems like a long time ago. She needs bone marrow tests once a month for the next six months and then she’ll be seen less frequently. The hardest part is the thought that the cancer could return but that the chances of that happening decrease with time.

“That’s why we want to do everything we can to support further research into children’s cancers.”

Holly and her family are encouraging the public to donate any pre-loved quality fashion and homeware they no longer need to their nearest TK Maxx store.

When sold in Cancer Research UK shops, each bag of items donated could raise up to £25 to help fund research into children’s and young people’s cancers.

Christina said: “It’s thanks to research that Holly is here today. That’s why raising money for Cancer Research UK for Children and Young People is so vital.

“Holly and I will be having a good clear-out at home to find clothes and things to donate, and we hope our experience will inspire others to do the same. Their unwanted items really could save lives.” 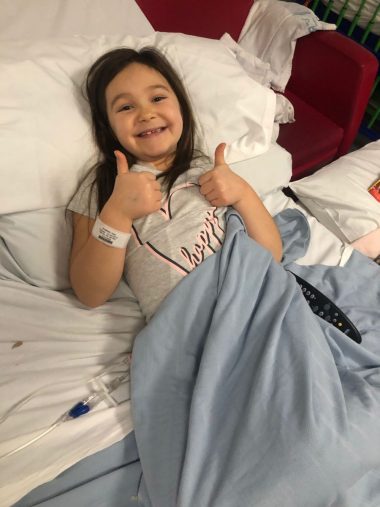 “She’s been so brave throughout it all,” said mum Christina.

Paula Young, spokesperson for Cancer Research UK for Children and Young People in the West Midlands region, said: “We’re grateful to Holly and her family for helping to raise awareness. Cancer in children and young people is different to cancer in adults – from the types of cancer to the impact of treatment and the long-term side effects survivors often experience. So, it needs more research which campaigns like Give Up Clothes for Good help to fund.

“We want to help ensure more people under the age of 25 survive cancer with a good quality of life. That’s why we hope as many people as possible will show their support and donate any quality clothes or goods to their local TK Maxx store.”

Donations to the Give Up Clothes for Good campaign are accepted at any TK Maxx store, including the branch at Elliot’s Field Retail Park in Rugby.

Supporters can also help by wearing a gold ribbon badge – the awareness symbol of Childhood Cancer Awareness Month – which are available from Cancer Research UK shops and selected TK Maxx stores during September.

See above to watch the video of the moment Holly rang the ‘end of treatment’ bell.