HOLLYWOOD actor and ex-wrestler Dwayne ‘The Rock’ Johnson has sent a heartfelt musical message to a brave Rugby schoolgirl after learning that she would be spending her seventh birthday fighting cancer in hospital.

Holly Hughes from Cawston was diagnosed with leukaemia for the second time in February, and had to spend six months in hospital undergoing a life-saving stem cell transplant.

Knowing that she would be spending her birthday in hospital, Holly’s dad Chris wrote to her celebrity heroes to see if they could help in his mission to cheer her up.

Chris said: “We had some lovely messages of support back from people like Oliver Phelps and the Rybka Twins – but Dwayne’s video just blew our minds.”

In the video Dwayne sings the song You’re Welcome, as sung by his character Maui in Disney’s Moana – but changes the chorus to: ‘What can I say except happy birthday.’

Holly’s beaming reaction was also recorded as she watched the clip for the first time at home with her best friend Lucy.

“The video didn’t arrive in time for her birthday in June but that didn’t matter,” said Chris, who had to juggle hospital stays with his fiancee Christina as they looked after Holly’s siblings, Harry, aged three, and Summer, aged 14 months.

He added: “Holly is such a strong character. She told us that her birthday was the best ever, even though she was stuck in hospital. Being able to surprise her with this video afterwards was just phenomenal and we’d like to thank Dwayne from the bottom of our hearts.”

Holly was initially diagnosed with Acute Lymphoblastic Leukaemia in 2016, finishing a tough treatment plan two years later. Due to improved research and treatment, her parents were told the chances of a new leukaemia developing in the future were just one per cent.

But in February, after developing unexplained bruises on her body, Holly was diagnosed with Acute Myeloid Leukaemia, a different form of the blood cancer that affects the bone marrow and requires a stem cell transplant as well as chemotherapy. 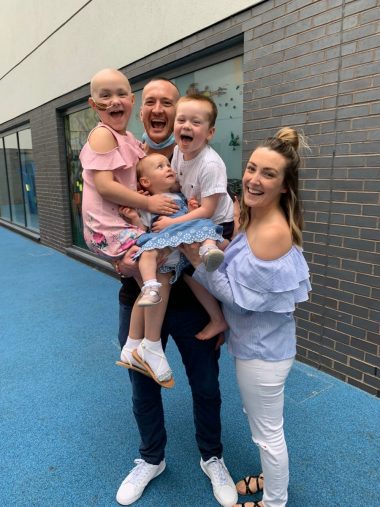 After six months in Birmingham Children’s Hospital, which saw her lose her hair and fight off numerous infections, Holly rang the end of treatment bell for the second time in August.

“It was the best feeling,” said Chris, who runs Hughes Plumbing and Heating. “We’ve been through so much and Holly was in hospital for such a long time that it was just brilliant to have her back.”

Holly and her family have shared Dwayne’s heartfelt video during Children’s Cancer Awareness Month to help other families affected by the disease.

They are also supporting TK Maxx’s Give Up Clothes for Good campaign, encouraging people to take donated goods to stores across the UK to raise funds in support of Cancer Research UK for Children and Young People.

And their friends have rallied together by setting up a special fundraising page to help them get through.

Close family friend Daniel Boyle, who set up the GoFundMe page, said: “People don’t realise that a diagnosis like this makes it almost impossible for parents to work.

“Chris and Christina had to stop working on the business the first time Holly was diagnosed with cancer, and have spent the past few years building the business back up.

“I set up the page because this latest diagnosis made it almost impossible for them to work again as they juggled being by their daughter’s side in hospital with looking after their two babies.”