A DEDICATED Rugbeian who ‘changed his life’ by shedding 10 stone has raised a four-figure sum for Cancer Research by running every day for a year.

Graham Old ran just under 1,292 miles in 209 hours over the course of the last 12 months – and even ran home in the early hours of Christmas Day in a full Santa suit!

Spurred on by family and friends who have fought cancer – including his brother Derek, who is now free of the disease – Graham has raised nearly £1,500.

Graham, 50, said: “I feel completely different. It was emotional and draining, but so rewarding and worthwhile.”

At his heaviest he weighed 25 stone, but was down to 15 by last November – thanks in no small part to a ‘Couch to 5k’ weight loss programme he started just seven months previously. 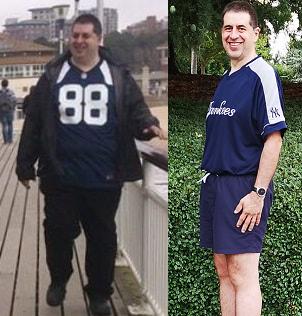 At his heaviest, Graham weighed 25 stone (left) – but he ‘changed his life’ by shedding 10 stone (right).

“When I first started, I went to the local park in the dark so nobody could see me,” he said. “I remember the programme said I had to run for 20 minutes, and I thought: ‘seriously?’

“But now I can go out and run for two hours.”

The IT manager from Hillmorton decided he wanted a challenge – and was inspired by a newspaper article about a man who took on a similar challenge.

He said: “I thought, I could do that. I’d just started the Couch to 5k and decided that I fancied giving it a go.

“Initially it was a mile a day, but it increased to 3.5 miles on average.”

His first run was on the Isle of Wight, where he was holidaying for his and wife Helen’s 25th wedding anniversary a year ago.

“It was about 1.4 miles and it took me about 20 minutes – much slower than I was doing towards the end.”

He came up with some creative ways of sticking to his challenge.

“Because I was running every day, I had to run on Christmas Day. So I went to midnight mass at St Andrew’s Church, and I ran home wearing my Santa outfit.

“So I did my three miles at half past midnight, hoping there were no kids looking out of their windows wondering why Santa was running down the road. It was only when I got home I thought that wasn’t necessarily the best idea!” 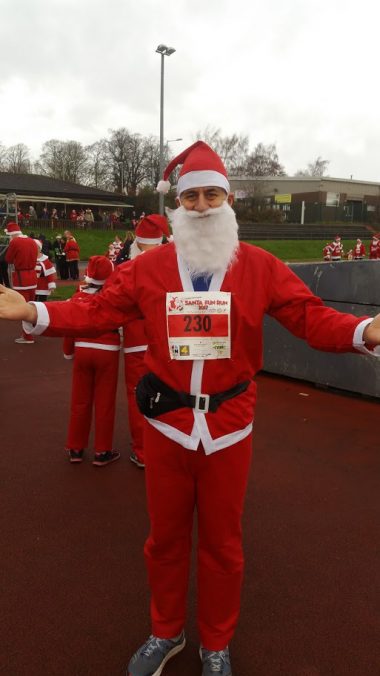 Graham at last year’s Rugby Santa Fun Run, in the suit he wore while running home in the early hours of Christmas Day.

He also ran a leg of the East Midlands Grand Prix at the Silverstone racing circuit – where he underestimated just how close he was to the chequered flag.

“Coming into the pit lane to finish, my heart sank when I saw the finish was at the end of the pit lane, not the beginning,” he said.

“I thought, oh, you’re joking! So I had to pick up the pace again.”

He even ran on the beach at dawn when visiting Aberystwyth to look at the university with his daughter.

But his favourite runs were along the canal towpaths around Rugby.

“I’ve really enjoyed running along the canals. It’s nice, it’s peaceful, and there’s an awful lot around Rugby that you don’t know is there. And people are so nice, waving to you as you go past.”

He says none of this would have been possible if he had not made the decision to lose weight.

“I changed my life,” he said. “That enabled me to take on something that not many people do. To be able to raise money and put something back has been key.

“Those people I know who have been affected by cancer have been in my thoughts when I’ve been out running.

“When I’ve struggled to get out – if it’s been cold or wet – all I do is look at the reason why I started this and I get out there. A little bit of pain for me is nothing compared to the pain other people go through.

“In the few days before I finished the challenge, I had to choke back the tears when I was running, because it was starting to hit me. It’s quite hard to run when you’re blubbing like a baby!

“If I can help one person, one family, then it has all been worthwhile.”

And he isn’t finished. Graham will run the Birmingham Half Marathon next month, and has applied to join the Slimming World Cancer Research team for the 2019 London Marathon.

His ultimate goal is to return to where it all started – the Isle of Wight – to run 63 miles around the island in two days.

“That will be the big one I want to work up to in a couple of years,” he said. “And then I’m sure I’ll find something else after that.”

Visit run365.oldrugbyonline.com to donate to Graham’s cause.