A GANG of machete-wielding robbers who assaulted a security driver in a Rugby supermarket car park and stole cash have been convicted.

A Rugby man and two men from Nuneaton have pleaded guilty to the robbery, which they committed in broad daylight outside Lidl in Bilton Road in April 2019, following an investigation by Warwickshire Police.

Aaron Liburd, 42, of Prior Park Road in Rugby, and Nuneaton men Kevin Mullen, 38, and Daniel Jordan, 43, all pleaded guilty at Warwick Crown Court. 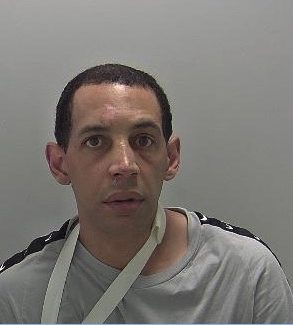 Rugby man Aaron Liburd was among three men convicted of the robbery.

At around 3.40pm on April 9, 2019, a driver of a cash in transit van was threatened with a machete and assaulted in the supermarket car park.

The driver lost hold of his cash, which the suspects then drove off with.

When the security dye subsequently went off on the cash, the men abandoned their car in Farnborough Avenue.

Liburd was arrested on April 12 this year.

At around 5am on May 6, 2019, a robbery took place at Tesco in Skegness. This was later established to have been committed by Mullen and Jordan while on the run from the Rugby robbery.

Investigating officer Det Insp Collette O’Keefe from Leamington CID said: “This was a significant investigation which involved a dedicated team working on it for two years.

“On the day of the Rugby robbery, these men showed extreme violence, using machetes in broad daylight outside of a supermarket. This was a pre-planned job and resulted in members of staff being understandably frightened, as well as the loss of a significant amount of cash.

“I’d like to thank the investigating team for their tireless dedication, to enable this case to come to a successful conclusion.”

All three men have been remanded and will be sentenced at Warwick Crown Court on June 18.