A GROUP of rail users hope a recently-named road in Houlton is a sign of things to come.

The proposed Rugby Parkway station currently has no funding confirmed and landowners have not been consulted.

But Rugby Rail Users Group hopes the station will be built in Houlton.

Group chair Stephanie Clifford said: “In most villages around Rugby, such as Clifton on Dunsmore, ‘Station Road’ is an indication of the former location of a railway station, but in Houlton it shows an ambition for the future.

“This forward-looking naming is positive and aspirational, but I would caution prospective Houlton residents that they shouldn’t expect trains to pick them up anytime soon.”

Warwickshire County Council (WCC) voted in 2015 to build the Rugby Parkway station off the A428 Crick Road, on vacant land between existing housing and the Daventry International Rail Freight Terminal (DIRFT).

But plans for the £11million station were put on ice in 2018 after a deadline to secure funding passed. 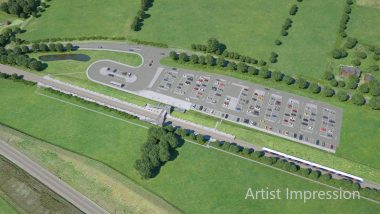 An artist’s impression of how Rugby Parkway station could look.

WCC was to contribute £2m toward the project, with £4million coming from the Coventry & Warwickshire Local Enterprise Partnership’s (CWLEP) Growth Deal fund.

But WCC’s bid to secure the remaining £5million from the government’s New Stations Fund failed – leading to CWLEP withdrawing its share.

Rugby Parkway station would have 360 parking spaces and initially run two trains to London every hour, serving the 6,200 new homes being built at Houlton as well as employees at DIRFT.