THE DEMOLITION of part of Rugby Central shopping centre to make way for new flats has been proposed.

A plan has been unveiled by architects Corstorphine & Wright and Q&A Planning to knock down the northern wing of the centre and replace it with two seven-storey blocks comprising 210 apartments and ground-floor shops.

The proposals include expanding the existing pedestrian access in North Street into a public space with seating, surrounded by 1,700 square metres of commercial space occupied by retail and food and drink outlets.

The new homes are planned to be ‘car free’ with an emphasis placed on residents using public transport, walking, and cycling – although residents will have the opportunity to rent parking spaces in the main shopping centre car park. 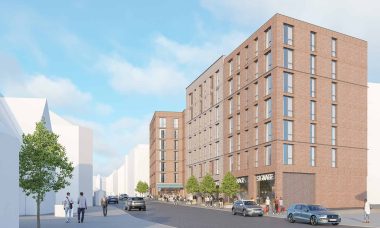 The northern wing of the shopping centre would be replaced with two seven-storey blocks comprising 210 apartments and ground-floor shops.

A Corstorphine & Wright spokesperson said: “The regeneration of Rugby Central is an opportunity for significant investment within the town centre and seeks to provide a wider range of facilities and services combined with new homes to allow local business to thrive.

“The new development will have a contemporary feel with brick detail to complement the surrounding environment and fretwork panels inspired by Rugby’s involvement in the aeronautical industry.”

They said the new public space would create ‘a destination point’ which could be used for local events.

They added: “The proposed mix of uses will benefit the local economy as an emphasis will be placed on new activities, cultural events and night-time use attracting more visitors and promoting sustainable urban growth.

“The proposed site is highly sustainable and will have significant benefits for the town centre in years to come. The provision of new high-quality homes, commercial space and improved public realm will act as catalyst for further investment in the town. The discouragement of car use will also be a crucial part of the strategy to reduce reliance on the private car and move a step closer to achieving carbon neutrality within Rugby.”

The two-storey Rugby Central, formerly Clock Towers Shopping Centre, first opened in 1979 and is home to more than 50 shops.

In 2015, it was bought by CT Properties for just over £27.5million, after previous owners CBRE Global Investors failed to attract retailer backing to its expansion plans.

The centre was rebranded as Rugby Central in 2017 following an 18-month refurbishment, modernisation and upgrade project during which the notoriously leaky roof was replaced, and new granite flooring laid.

A planning application for the new proposals is due to be submitted by London-based Karenor Partners Ltd later this month. If approved, construction will start in 2023 and the new development will open in October 2024.

Q&A Planning is inviting residents to share their views on the plans. Visit www.qaplanning.co.uk/Rugby for more information and to provide feedback.

Residents can also email info@qaplanning.co.uk or write to Q+A Planning Ltd, The Stables, Paradise Wharf, Ducie Street, Manchester M1 2JN with their views, before the deadline of Thursday April 14.