PARTS of Ashlawn Road and Bilton are set to leave Rugby’s Parliamentary constituency, with a chunk of Cawston moving into Rugby, under proposed changes to constituency boundaries in England.

Under initial proposals from the Boundary Commission for England (BCE), land around the western end of Ashlawn Road would move to the Kenilworth and Southam constituency.

This would include an area bordered by the under-construction estate around the water tower to the north, the estate’s new roundabout to the west, Onley Lane to the east, and Rains Brook to the south.

A small part of Bilton – including Oldbury Close, Potsford Road, and part of Lime Tree Avenue – would also move to Kenilworth and Southam.

The south west end of Cawston – including most of Trussel Way and neighbouring roads – would move from Kenilworth and Southam into Rugby. 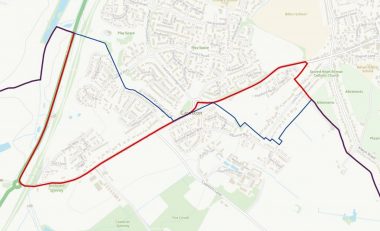 The rest of the current Rugby and Bulkington constituency would remain the same.

The 2023 Review of Parliamentary constituencies was formally launched in January this year.

The number of constituencies in the West Midlands will decrease from 59 to 57.

The BCE says it has ‘as far as possible’ tried to regard local ties, geographic factors, local government boundaries and existing constituencies, and to minimise disruption caused by proposed change.

A public consultation on the changes has been launched.

Tim Bowden, Secretary to the BCE, said: “We consider all feedback received during the consultation process, and it is your local knowledge that helps us to shape constituencies that best reflect your local area.”

Visit www.bcereviews.org.uk to view the proposed changes and take part in the consultation, which closes on August 2. There will be a further two rounds of consultation in 2022.

The Commission will present its final recommendations to Parliament by July 2023.