PLANS to replace a steep 74-year-old canal footbridge in Braunston are moving ahead.

The Canal and River Trust charity has updated the community on plans to replace Bridge 1A, known as the Ladder Bridge – a ten foot high up-and-over bridge with steep wooden steps which is inaccessible to many.

The charity has been left a legacy of £164,400 from the late Peter Andrews towards improvements to the canal in the Braunston area.

Peter, who died of cancer in 2018 at the age of 83, wanted his legacy to be spent on a wider and more accessible replacement of the Ladder Bridge, which carries the Grand Union Canal towpath over an entrance to Braunston Marina.

With initial concept designs suggesting the replacement could cost a further £150,000 on top of Peter’s donation, the Trust is investing in detailed designs, including extensive ground investigations, to get a more accurate estimate.

The ground investigations are due to take place in early July, and the Trust expects to have accurate estimates for a replacement bridge by the end of August.

Once the Trust has an up-to-date and accurate cost estimate, it will assess funding opportunities to appraise the viability of the project. 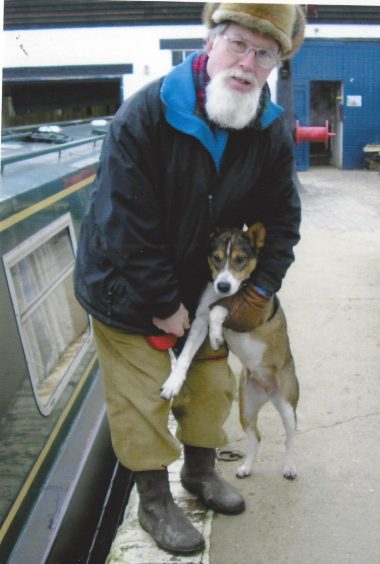 Peter Andrews, pictured in around 2006 with his dog Molly, who he had to carry over the Ladder Bridge. Photo by John Hicks.

Former London schoolteacher Peter took early retirement in 1994 and moved to a flat in Braunston Marina to indulge his passion for the canals. He walked the Braunston towpath daily, litter-picking as he went.

Tim Coghlan, Managing Director of Braunston Marina, said: “Probably no one knew the problems posed by the Ladder Bridge better than Peter. Peter’s last dog, a rescue called Molly, was so nervous of it that Peter had to carry her over it.”

He said Peter responded enthusiastically to his suggestion of making a donation to the Canal & River Trust for a new bridge, saying he would be ‘very honoured’ for it to be named ‘Peter’s Bridge’.

Tim added: “In my final email to Peter, I wrote: ‘Now I know that ‘Peter’s Bridge’ will go ahead, it will be a fitting monument to your friendship to so many, your generosity and courage, and your great love of our waterways’.” 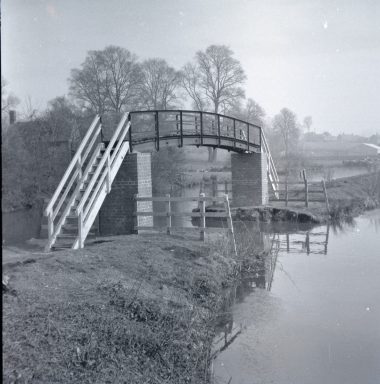 The Ladder Bridge shortly after its construction in 1948. Photo from Jim Payler collection.

Tim told The Observer how the bridge was built in 1948 by the newly formed British Waterways Board to allow surplus working narrowboats to be stored at a time when post-WWII canal carrying was in steep decline, effectively cutting the towpath in half.

“Canal leisure use was in its infancy, and the Braunston towpath itself was in a very sorry state – so there was little if any objection,” he said.

“The steps have been twice modified in recent times to make them a little easier and safer, but the Ladder Bridge remains unusable to wheelchairs, push chairs, anyone unable to climb those steep stairs, and some dogs which cannot cope with them.”

Writing in tribute to Peter, Canal and River Trust CEO Richard Parry said: “The Canal and River Trust is hugely grateful for the selfless and dedicated volunteering that Peter did, literally every day and in all weathers, to keep the Braunston flight tidy and in the best possible condition for visitors to enjoy – and also for the generous legacy he has left to help us replace the Ladder Bridge at Braunston.”

The Trust has provided the executors of Peter’s Will, as well as the Parish Council and other stakeholders, with an update on the project and will keep the community informed as plans progress over the summer.

Visit www.canalrivertrust.org.uk to find out more about the work of the Canal & River Trust.