A FOOTBALL-mad Rugby woman has explored the connection between the beautiful game and national identity in her new play.

ENG-ER-LAND, written and performed by Hannah Kumari, is coming to Warwick Arts Centre next month as part of a national tour.

Rugby-born Hannah’s very personal story follows her own experience of racism as a football fan, and her struggles to be accepted into a historically white male world. 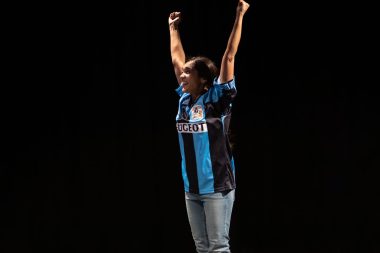 Sky Blue Hannah has been a football fan ever since she saw her first match at Coventry City’s old Highfield Road stadium in 1996.

Hannah saw her first match at Coventry City’s old Highfield Road stadium in 1996 – and she remains a Sky Blue to this day.

She said: “Walking up to Highfield Road for the first time was mind blowing. Seeing all the other people with their shirts and scarves, feeling like you’re part of that, feeling that excitement in the air.”

She wrote ENG-ER-LAND in June 2020 in the wake of the Black Lives Matter protests, and having seen ‘supposed’ football fans acting in an aggressive and anti-social way.

“It made me sad and angry that we are still in this position,” she added. “I felt compelled to reflect on my own experiences at football matches as a mixed raced teenager growing up in the ’90s, and now as a woman.

“The play is also an exploration of my mixed-race identity, and the idea of Englishness – what does it mean to be English and who gets to define that?

“I wanted to write a play that was fun and uplifting, whilst also confronting big issues.”

The show, supported by The Football Supporter’s Association (FSA), comes in the wake of shocking increases in the levels of race hate and homophobic abuse around football matches and across social media.

Studies by Kick It Out, the English football’s equality and inclusion organisation, found there was a 53 per cent rise in reported racial abuse in the professional game in the 2019-20 season compared to the previous year.

The organisation also received 117 reports of abuse based on sexual orientation compared to 60 in the previous season – a 95 per cent rise.

Former professional footballer Anwar Uddin is an FA Council Member and Campaign Manager for the FSA Fans For Diversity – a campaign which works to promote inclusivity in football.

He said: “I hope that, through empathy and shared experience, audiences around the country can really connect with Hannah’s play in a positive way, and are encouraged to reflect on their own behaviour and stand up for others.”

Hannah will also be making her debut on Sky Arts in the spring in her new short film, Devi, which she has written and stars in. Commissioned by Sky Arts, Coventry City of Culture, The Space Arts and Shoot Festival and originally developed through a commission with The Wardrobe Ensemble, Devi is about a woman of mixed heritage trapped in a cycle of addiction.

EN-GER-LAND will be at Warwick Arts Centre on February 16 and 17. Visit www.warwickartscentre.co.uk/whats-on/eng-er-land-2311 for more information.

Visit www.kickitout.org for more information on Kick It Out.

Plans for new road to go before public at information event