HUNDREDS of school students were given a stark lesson in road safety thanks to a Rugby campaigner whose 16-year-old daughter was tragically killed when a driver mounted the pavement.

The Safe Drive Stay Alive (SDSA) event was held at Rugby School’s Temple Speech Room before an audience of 400 sixth-formers. 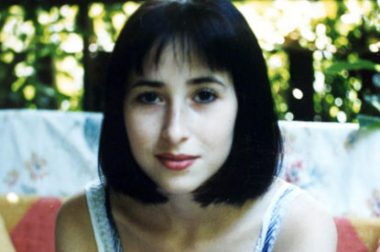 Livia Galli-Atkinson, 16, was tragically killed when a driver mounted the pavement and ran her over in 1998. (s)

Launched in the UK in 2000, the stage show was introduced to Rugby School in 2017 by George Atkinson – who has campaigned for better road safety education for young people since his daughter Livia was run over in 1998 while walking to her ballet class.

The SDSA show, which balances educational content with real-life drama, aims to show young drivers why they and their passengers are so vulnerable in their early years on the road, and what they can do to reduce this vulnerability.

The show uses testimonies from officers in the emergency services about their experiences in dealing with the aftermath of serious road collisions, from survivors of collisions, and from those who have been bereaved.

This year’s show featured a new section on other forms of transportation used by young people.

Rugby School student Cookie said the talk was ‘hugely impactful’, adding: “Seeing the reactions of people who had to deal with car crash fatalities struck me. Having recently passed my test, I’m going to be far more careful about driving and make it clear to other friends that they need to be careful too.”

Fellow student Max said: “The talk was deeply moving and caused a lot of reflection within myself and my friends. We all related and empathised with the stories we heard. It made us think before we take actions with consequences which we do not wish to live with.”

Charlotte added: “The talk was incredibly hard hitting, and it definitely shocked and made people aware – as evidenced by the silence that followed the presentation.”

Lisa Greatwood, Head of Personal, Social, Health and Economic Education at Rugby School, said: “The powerful true life stories of the emergency service personnel showed the devastating real life consequences of dangerous driving. The Safe Drive Stay Alive presentation acted as an excellent conversation starter and we are incredibly grateful that we were able to host the event.”

The show was sponsored by CEMEX and attended by Chiedza Mupfumira, the company’s UK Social Impact Specialist.

She said: “We recognise the vulnerability of new and young drivers and we hope that this programme will go a long way in influencing the behaviours which can lead to a generation of risk averse drivers.”