The time is right for 140-year-old clock tower's restoration

A 140-YEAR-OLD clock tower has been restored to its former glory.

The revamped Clock Tower at Manor Farm in Catthorpe has been unveiled after undergoing a huge and complex restoration by the family who own it.

Michael and Susan Grindal, who have owned the farm for nearly 50 years, have painted and maintained the 18 metre tower over the years – but in 2021 noticed it had more of a lean than normal.

After scaffolding was put up, it became apparent an overhaul was needed as the wood around the clock was rotting, although the clock structure itself – face, bell, roof tiles – remained intact. 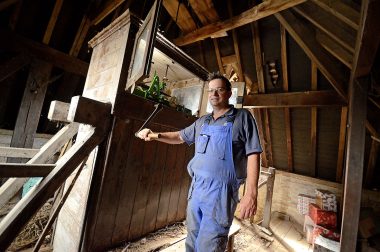 Matthew winds up the clock: “It’s quite technical but we have managed to work it out.” Picture by Marcus Mingins 3122003MMR2 copyright Bullivant Media

Michael and Susan’s son Matthew said: “We have now finished the clock and it looks magnificent. We have got the time and chiming in order – it’s quite technical but we have managed to work it out.

The Victorian building at the centrepiece of the farm currently houses Manor Farm Shop and Farmhouse Kitchen – but over the years it has been a home for calves, laying hens and even had a spell as a horse swimming pool.

Built by Major Cross who resided at Catthorpe Towers – now Catthorpe Manor Hotel – in 1882, the Clock Tower was the central building to his vision of what a farm should be.

Matthew said: “The first time the tower was painted was not long after mum and dad arrived in 1974, when a Latvian ex-solider’s dog bit me and offered to paint it as an apology. He used a ladder, and he also had a wooden leg!” 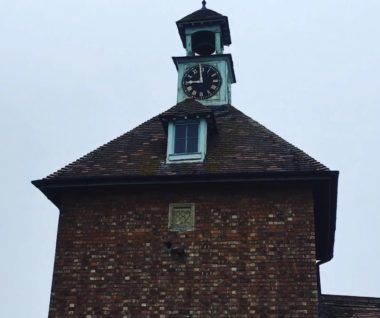 Before: The family was tempted to take the clock down when it was looking the worse for wear.

He said the family was tempted to take the clock down and build a new roof when they obtained quotes for the restoration work – but something ‘niggled’ at them.

“Farmers always say you don’t own the land, you are merely custodians of it,” he said. “We felt the same about the clock.”

He thanked Browns Builders of Market Harborough, Unite Scaffolding of Northampton, and Grey Inman Hall for their support and help, adding: “Like many of our farm shop producers, it has been a local family job.”