ANOTHER landmark from Rugby’s skyline could disappear after a supermarket chain announced plans to build a new branch at the site of Cemex House, the high-rise office block in the town centre.

Discount supermarket Aldi has launched a public consultation on its £5million plan to ‘transform’ the Evreux Way site, which would include the demolition of Cemex’s UK head office.

Cemex has sold the building and plans to move to a new site in Binley. 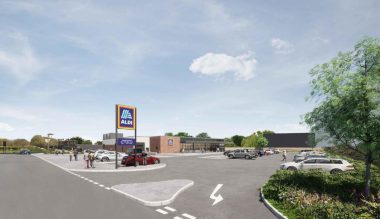 An artist’s impression of the proposed store, as viewed from Corporation Street.

An Aldi spokesperson said: “Our proposals will deliver a multi-million-pound investment into the heart of Rugby, and create new jobs and investment in the town centre while also attracting new visitors to Rugby, helping to boost the local economy.

“Aldi’s investment in Rugby will deliver a new retail store to help support the town centre to thrive in a post-Covid world.

“We know that in other locations, Aldi attracts customers to surrounding shops, which improves the trading and footfall of those stores. We also offer free parking for 90 minutes, meaning that Aldi customers will have more than enough time to visit other local shops as part of their visit to Rugby town centre.”

The company says the plan, which includes a 93-space car park, would help to support the wider regeneration of the town centre, and create a ‘welcoming and attractive’ entrance to that side of the town.

The company is undertaking a Transport Assessment to establish how the plan would affect town centre traffic, and consider whether any mitigation is needed.

The new supermarket would create up to 45 new jobs, as well as additional jobs during construction and throughout the supply chain. 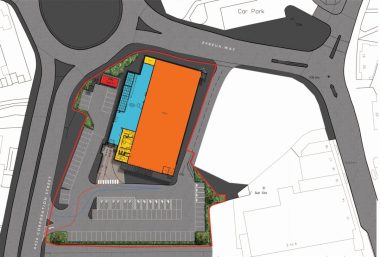 The store would occupy the site where Cemex House currently stands.

A Cemex spokeswoman said Cemex House no longer met its requirements, and had agreed a lease on a building in Binley which would become its new UK head office.

She added: “The office at Binley is much more modern than Cemex House and it gives us the opportunity to create a great working environment, designed specifically to meet the needs of our people and our business.

“We expect to move in October 2022, although this is subject to change depending on when refurbishment work is completed, and we will shortly commence a consultation process with affected employees. We will provide further external updates as required prior to the move.”

If approved, the plans will see another change to Rugby’s skyline. The famous radio masts were taken down in 2007 to make way for the fast-growing Houlton neighbourhood, and two eleven-storey blocks of flats at Biart Place were deconstructed during lockdown – with three blocks at Rounds Gardens also scheduled for demolition.

And in April, a plan was unveiled to knock down the northern wing of the Rugby Central shopping centre and replace it with two seven-storey blocks comprising 210 apartments and ground-floor shops.

Visit https://tinyurl.com/8f8tfnvx for more information on Aldi’s proposal, and to take part in the public consultation.