CONTROVERSIAL plans to build a massive electric car battery plant at Coventry Airport have been given the green light after being approved by Coventry City Council.

The proposals for the £2.5billion Gigafactory at the Baginton airport – which would create some 6,000 jobs – were also agreed by Warwick District Council’s planning committee on Tuesday (January 11).

The Gigafactory, which would be powered using 100 per cent green energy – including one of the UK’s largest rooftop arrays of solar panels – is a joint venture between Coventry City Council and Coventry Airport, which they hope will be operational from 2025.

It will manufacture high-tech lithium-ion batteries for the global automotive and energy storage industries.

The majority of the proposed site falls in Warwick district which is why both the Warwick and Coventry councils had to decide on the plans for the plant, which would cover nearly 80 hectares – the equivalent of around 150 football pitches. 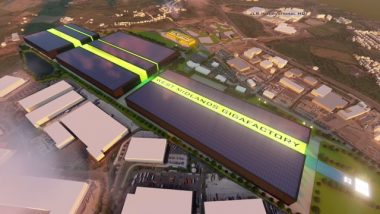 An artist’s impression of the proposed Gigafactory.

Project Director Mike Murray said: “This is an important milestone for the West Midlands Gigafactory. With outline planning permission supported, the site has everything in place that future investors, likely to be drawn from the global battery industry, need for a state-of-the-art Gigafactory. Thanks to this decision, we are now in strong position to progress our discussions with the global automotive and energy storage industries.

“Located at the heart of the UK’s automotive industry, the Gigafactory is closer to almost every car manufacturing plant in the UK than any of the other proposed or Gigafactories under construction making it an ideal location for global battery manufacturers.”

Coun Jim O’Boyle, Coventry City Council’s spokesman for jobs, regeneration and climate change, said: “This is good news for Coventry. The Gigafactory, alongside our ambitions including Very Light Rail, will put us at the front of the green industrial revolution bringing significant investment and job creation to our city.

“The Gigafactory is part of Coventry and Warwickshire’s ambitious 10-year vision and investment plan, it is at the heart of an area that has been developed to create the right environment for the next generation of automotive investment.

“We have the location, people and supply chain expertise developed in the automotive and battery sectors over many years to make us the perfect location for a Gigafactory. The next step is to secure an investor to ensure that the wider automotive and battery ecosystem in Coventry and the West Midlands continues to contribute towards increased economic growth, job creation and skills development.”

Warwick District Council Leader Coun Andrew Day said: “In the past 100 years, there has probably not been a more important decision for the British Automotive industry. A new industrial revolution is underway and once again the West Midlands is playing a key part. We’ve the opportunity now to create thousands of new and highly skilled jobs, boosting the national effort to reduce carbon emissions and build a more prosperous local economy.

“This has been a collaborative effort and special tribute is due to our dedicated officers and advisors who supported our residents and Councillors in completing the rigorous assessment of this far-reaching proposal. We stand ready to work with the Local Enterprise Partnership and other authorities, to engage the local businesses affected and assist our residents in dealing with the detailed plans as they come forward.”

West Midlands Mayor Andy Street said: “This is another crucial step forward in bringing our plans for a West Midlands Gigafactory to life.

“Not only will a Gigafactory support the future of our region’s automotive sector, creating thousands of new jobs, but it will also help protect our planet from the climate change emergency. It truly would be a game-changer, and I am delighted both Warwick District Council and Coventry City Council have recognised this and backed our vision.

“The West Midlands is already home to the country’s biggest car manufacturer, Europe’s largest research centre of its kind, the UK’s only battery industrialisation centre, and a world-leading supply chain. A Gigafactory therefore is the natural next step for the UK’s automotive heartland, and, working in partnership with industry and the Government, we will not rest until we have secured one.”

Warwick and Leamington MP Matt Western, who is also Chair of the All-Party Parliamentary Motor Group, is among supporters of the plans.

He said: “I have long been a champion of boosting regional manufacturing with an electric battery facility or ‘Gigafactory’ to support our rapidly transforming and hugely important car industry.

“More than a quarter of all new cars registered last year were electrified in some way – and we must build on this momentum for the sake of the industry and the environment.

“A new Gigafactory can make this possible while securing the dividends for the West Midlands.”

Others who back the plans include local Conservative MPs Jeremy Wright (Kenilworth and Southam) and Mark Pawsey (Rugby and Bulkington).

Supporters point to the region being home to car manufacturers including Jaguar Land Rover, Aston Martin Lagonda, and BMW, while Coventry Airport was already next to the UK’s largest battery research centre, the UK Battery Industrialisation Centre (UKBIC).

But there is strong opposition to the plant, most notably from Baginton and Bubbenhall Parish Councils respectively, with both raising concern at the impact of such a large site on the green belt together with traffic concerns.

And Save Coventry Airport campaigners, who fear for the future of the airport as a direct result of the plans, held an open day last weekend.

Others objecting include the All Party Parliamentary Group on General Aviation, The Campaign for the Protection of Rural England (CPRE), and Royal Mail, which has a hub neighbouring the proposed site.

Following the plans’ approval at both planning committees, outline planning permission will be formally issued once a legal agreement has been signed and government has been consulted. This is expected in March 2022.