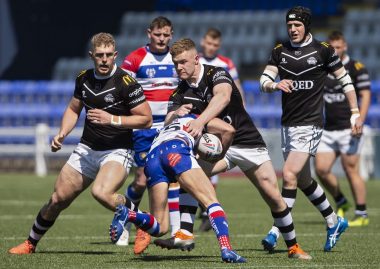 OWNER and director of rugby Alan Robinson says it was the fearless approach of his Coventry Bears side which impressed most in Sunday’s 38-30 comeback win against Rochdale Hornets.

Having fallen to defeat to London Skolars last time out, the Bears roared back in style to pick up their second two-point haul in Betfred League One this term, despite trailing for the majority of the encounter.

Robinson lauded the approach of his troops.

“I’m so proud of the lads and so happy with what head coach Richard Squires has achieved [so far] this season,” he said.

“Speed, fitness levels and discipline were all there, and the mental side was right too – they didn’t fear a side that are expecting promotion this year.”

The Bears laid down an early marker after launching and finishing a 75-yard counter-attack, with Dave Scott’s opening try converted by Dan Coates.

That advantage did not last long following Luke Fowden’s determined run to the hosts’ try line, and Joshua Jordan-Roberts’ extras levelled the scores. It proved a play which signalled a turnaround in fortunes for the away side.

The Hornets dominated play and, after much resistance from Coventry, gained the lead through Rob Fairclough’s converted score.

The deficit was cut by Kadeem Williams’ sprint into the far left corner for an unconverted try, though another period of short passing play from Rochdale cut through the Bears to breach their rearguard for a third time, Shaun Ainscough the next man to go over the line for another six-point haul.

In a game of frantic scoring, Liam Welham reduced the deficit to two points once more with another try, although Fuifui Moimoi had other ideas when crossing the whitewash to put Rochdale 24-16 in front at the break.

Nathan Hill’s try three minutes into the second half was quickly wiped out by Callum Merrit, with Jordan-Roberts as accurate as ever from the tee to reinforce the visitors’ stranglehold on the game.

But with chances continuing to come regularly, the Bears always had a horse in the race.

After a brawl that led to Rochdale’s Ryan Forshaw being sent to the sin bin, Coventry responded in style to turn around the scoreline.

With the man advantage, a converted Harry Kaufman try brought Bears to within four points of parity, before Matty Welham sent his side in front for just the second time of the afternoon – an hour after they had originally led.

Needing to protect their two-point lead for the remainder of the game, Squires’ men did well to fend off the continuous Rochdale threat and managed to settle affairs in the closing seconds. Launching a breakaway, an interception in the Bears’ third prompted a long-range attack which resulted in Scott crashing over for a fifth converted Coventry try.