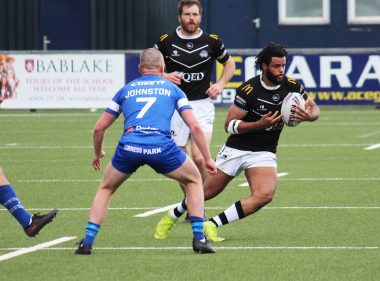 Going down in their season-opener, played out in front of an empty Butts Park Arena, Richard Squires’ charges fell 18-0 behind to the Raiders inside the opening quarter.

But the Bears can take a lot of heart from their response.

A Nathan Mossop try converted by Jake Carter sent Barrow in front, before the latter crossed the whitewash for the visitors’ second full try.

But after Coventry gained the momentum, Nathan Hill bundled himself over the line for an unconverted try. Then, with Dan Coates converting a Sam Bowring crossover, it was game on once again.

The Raiders were not willing to let the game pass them by, however, re-establishing their foothold with Carl Foster driving through the Bears’ rearguard to score. Carter was again on target with the extras.

Nathan Hill went over to close the deficit to 24-14 at the break, with scores from Carter and the hosts’ Matt Welham – the latter of which was converted – bringing an explosive start to the second half.

While Coventry continued to ask questions, Dan Toal and Adam Waine helped contribute to two more full scores to round off a victory for the much-fancied promotion hopefuls.

On Saturday, the Bears will visit West Wales Raiders.