Bilston a tough proposition, but Evans spot-on for Valley in the Vase 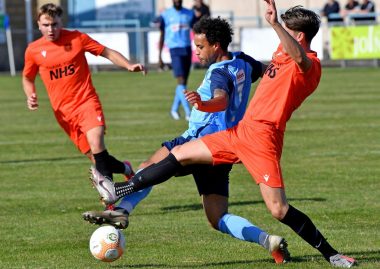 The 4-1 shoot-out victory followed a 1-1 draw over 90 minutes, with no extra time played – Danico Johnson cancelling out a fourth-minute opener from Bilston’s Todd Ferrier just before the break at Butlin Road.

In all, it was a victory that Valley will undoubtedly take after failing to show their best side during a lacklustre contest in the first qualifying round tie.

As a result of their progress in the competition, Carl Adams’ side will now host another Step Six side in Ellesmere Rangers of the North-West Counties League in the next qualifying round on Saturday, October 10.

Goalscorer Johnson was the only change to the side which lost at Shepshed Dynamo in midweek, with some rustiness from that defeat perhaps still present when Bilston stunned the Butlin Road faithful with the opening goal. 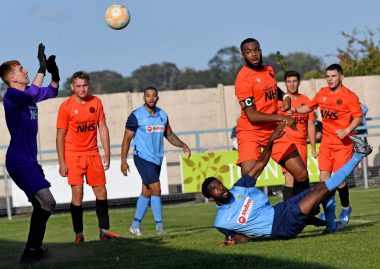 A well-worked set-piece started by Lewis Gill and hammered home by Ferrier got the better of Rugby custodian Sam Lomax to leave the 183 fans that were gathered in dismay.

The hosts almost went two behind when a promising Matt Pinder strike narrowly cleared the crossbar, giving Rugby the wake-up call that was needed to spark a revival.

A first decent opening for Adams’ side helped turn the tide when Dylan Parker nudged goalwards – but only into Brad Clarkson’s gloves – from Loyiso Recci’s flick-on, before the levelling goal arrived five minutes before half-time.

And what a fine finish it was, Johnson showing real composure to gather the ball from Caine Elliott’s centre and then find the net.

With the second half commencing, few chances were registered as the deadlock remained intact. 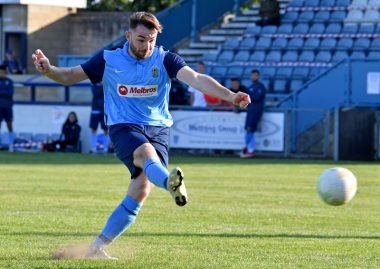 The returning Ryan Seal was one of Rugby’s penalty heroes. Picture by Martin Pulley.

That was until the emergence of Ryan Seal – making a first appearance of the season following injury – replaced Parker and almost made a telling impact straight away.

His free-kick sat up kindly for Liam Francis, a defender with four goals to his name already this term, who showed real confidence to attempt an overhead kick and draw a great save from Clarkson.

A penalty call for the visitors was waved away and came as a real relief for Rugby, after Lomax appeared to make contact with Bilston’s Leon Taylor.

Rugby’s shot-stopper atoned for the scare by keeping out late efforts from Ben Baldmore and Ferrier, which fell either side of Johnson’s late attempt that somehow cleared the crossbar down the other end.

Rugby made no mistake when it came to penalties however, with James Hancocks, Recci and Seal all dispatching their efforts, Lomax pulling off two saves and Charlie Evans left to convert the decider.