Borough's Pumas off to a flyer in Autumn Trophy

A STRONG start to the Coventry & Warwickshire League Autumn Trophy was made by Rugby Borough’s under-10’s Pumas side after dismantling Bedworth Warriors Hornets 4-1. 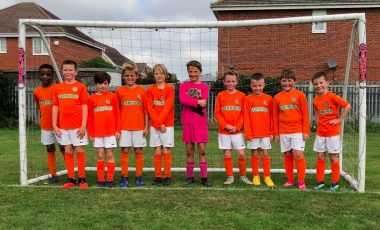 In what was an entertaining opening contest, an excellent goal-line clearance by Borough skipper Austin Bishop kept the game goalless after an end-to-end start.

Kryspin Gos scored the crucial goal to break the deadlock just before the break to make it advantage to the visiting Pumas, a strike which allowed Rugby to play with more freedom after the break.

And it was Gos who was at it again with two further strikes to seal his hat-trick and put Rugby in cruise control later in the half.

With Felix James and Austin Bishop forming a strong rearguard and Fynn Lafferty keeping alert in goal, Rugby were ultimately safe despite a Bedworth consolation.

With seconds to spare, a long-range stunner from Mulholland then put the rubber stamp on the win when picking out the back of the net from the half-way line.

Pumas coach Stu Bishop was complimentary of the efforts of his side, and said: “The boys were fantastic today, and with great passing, shooting and lots of positive play, it was great to see them come home with a victory.”

Borough have offered their thanks to Carwood Motor Units Ltd for their continued support throughout the current campaign.

The club are actively on the lookout for new players for the 2020/21 season, with interested players asked to contact the club at www.rugbyboroughfc.co.uk, or by contacting Stu Bishop at bishopstu@hotmail.co.uk, or on 07525 990179.

Coventry twins brace themselves for Tokyo