MATTHEW Ewer played an immense captain’s innings to earn Rugby a crucial victory in the battle against the drop last weekend, following a nail-biting four-wicket win over Bablake.

The Warwickshire League Premier Division strugglers gave themselves a much-needed boost in their hunt for salvation this term, ending a run of six league matches without success that stretched back to May 1.

And the biggest part of the success was undoubtedly their unbeaten skipper Ewer, who recorded 113 runs in 159 balls – including ten boundary hits and five maximum scores – to provide the bulk of the Rugby scoring at Webb Ellis Road.

Visitors Bablake gave a good account of themselves to open the encounter, as openers Haaris Azram (58) and Billy Dyal (24) put on 80 runs for the first wicket. 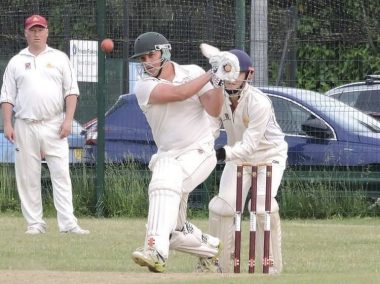 Matthew Ewer was in inspired form to guide his side to victory.

While Wes Lansdale (2-29) was able to dismiss the former, a stand of 52 between Ruari Willis (32) and Matt McCarthy (19) threatened to provide the away side with another high-scoring outlet – until the Rugby bowler struck for his second wicket of the afternoon.

From there, Bablake were unable to offer much in the way of a persistent threat at the crease, though tailender Saawan Patel (23) provided some quickfire runs to pad out his side’s total score of 190.

Rugby were somewhat laborious in their response, though not through the fault of their opener and skipper Ewer, as the lack of a suitable batting partner threatened to derail the hosts’ challenge.

But through a stand of 46 with Michael Hughes (17), and and an unbeaten 55 with tailender Henry Parker (22, no), Ewer was able to drag his side over the line with just eight balls remaining.

THERE was disappointment for Willoughby however in Northamptonshire League Division Six, following a six-wicket defeat to Desborough Town’s second XI that sees them fall further behind the leading pack.

Now in eighth, the Woolscott Road hosts were off the pace at the crease – for the exception of the impressive Scott Cluley (53, lbw) – after managing 163-9.

It was a task which Desborough gratefully accepted, firing their way to victory with just over 14 overs to spare to hand their opponents a second successive defeat.

Led by Craig Burger (66, no), the visitors were emphatic in their response and thoroughly deserved a victory, leaving Willoughby to ponder their approach before Saturday’s trip to sixth-placed Northampton Saints.