Good Evans for Rugby after hat-trick show in the Vase 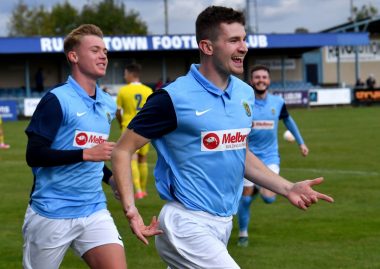 PROGRESS in the FA Vase was well earned by Rugby Town on Saturday after dismantling Ellesmere Rangers 6-1.

While both sides were reduced to ten men, Town had already netted the majority of their goals by the time Ellesmere’s Jack Sweeney saw red on the hour mark – Anthony Howell also receiving his marching orders with two minutes to play after Charlie Evans completed the scoring with his hat-trick goal.

The victory earned Valley a place in the first round of the Vase, where they will visit Dudley Sports of the West Midlands (Regional) Premier Division Saturday, October 31.

It was that man Evans who got the ball rolling for the Butlin Road hosts last weekend, starring in an unchanged team that looked desperate to atone for their previous defeat to Rothwell Corinthians.

Rugby hit the front after just nine minutes, such was their desire to bounce back, when the forward rose highest to meet Ryan Seal’s pinpoint corner and plant a header past Rangers’ Liam Caines. 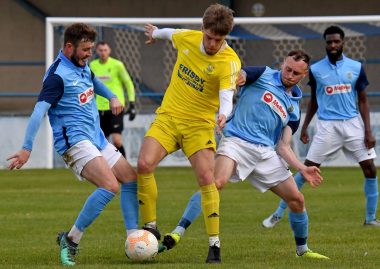 James Hancocks, left, and Lee Thomas, right, give an Ellesmere player no room to breathe. Picture by Martin Pulley.

While the away side threatened through Dave Howarth’s attempt, Caine Elliott put Town two to the good after converting Evans’ cross from an acute angle.

A ten-minute period in the sin bin for Dylan Parker helped Ellesmere gain a foothold when reducing the deficit – courtesy of Gary Meredith’s pearler into the top-left corner past the beaten Sam Lomax.

But with Evans striking again a minute before the break, the hosts were in the box seat again.

This time Town’s playmaker picked up possession from Danico Johnson before firing into the postage stamp.

The goal gave Rugby fresh impetus in the game, an aspect of their play which was most evident in their consistent pressing and harrying of Ellesmere players high up the pitch.

And eight minutes into half that approach reaped rewards in the form of a fourth goal, Parker dispatching from Evans’ pass.

Parker then added his second six minutes later after receiving from James Hancock, before deftly chipping the ball over the ‘keeper into the net. 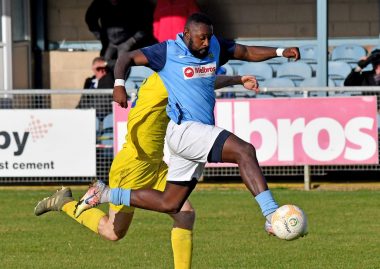 Danico Johnson bursts through on goal. Picture by Martin Pulley.

A red card for Sweeney added to Ellesmere’s misery with half an hour remaining after Johnson was denied from going clean through.

It was a decision which helped Rugby grab a sixth and final goal, Evans taking full advantage of the visitors being shorthanded to wrap up his hat-trick – slipping the ball home inside the penalty area from Lee Thomas’ byline cross.

Substitute Howell then saw red for the home side after making a late lunging tackle deemed dangerous by the referee, while the crossbar denied Parker his third of the game following a fierce shot that looked certain to hit the back of the net.

A trip to Lutterworth Town in the United Counties League Premier Division now awaits on Tuesday night (7.45pm) – the only fixture this week with a free weekend ahead.