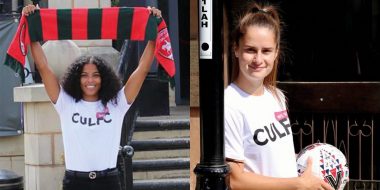 From left: Destiney Toussaint and Rio Hardy are the latest two names to commit to United for the 2021/22 season.

ASSURED business continues to be done by manager Jay Bradford, as Coventry United Ladies’ recruitment stepped up with the additions of Rio Hardy, and retained duo Anna Colville and Destiney Toussaint.

Hardy, 25, returns to these Isles after journeying to Iceland, the United States and Cyprus – where she most recently turned out for Apollon Ladies and represented the club in the Women’s Champions League.

A midfielder by trade, Bradford spoke glowingly of her latest recruitment, which takes the Red and Green’s incomings to eight, and said: “Rio is a player that we have been keeping track of for a while.

“Her stats speak for themselves, so I’m excited to see her flourish in the FA Women’s Championship.”

The player, meanwhile said the move made the most sense to her at this stage in her career, having attracted a number of potential suitors after deciding to depart the Mediterranean.

“This is a very exciting next step in my career,” said Hardy.

“I’m very happy to have signed, the clubs ambitions match my own and I can’t wait to get going.”

With Swiss striker Colville, 21, and midfielder Toussaint, 32, also tied down for the 2021/22 season, United will be hoping to push on and build on their tenth-placed finish last time out.

Pepper shakes up a storm to down Rugby Seconds

Rugby upbeat for next challenges after Racers success