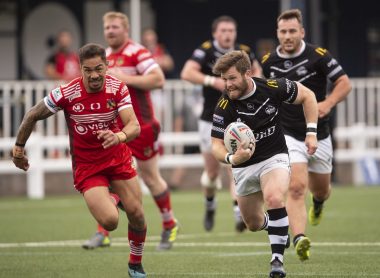 HEAD coach Richard Squires has heaped praise on the way in which his Coventry Bears side went about their business in the opening half of an eventual 34-16 defeat to Doncaster RLFC.

The league’s front-runners were well and truly under the cosh at Butts Park Arena at the break following a stunning showing from the hosts, who led 16-12, before a second-half fightback handed the points to the South Yorkshire side.

With Reece Rance and Dave Scott (2) providing the tries, and Dan Coates twice converting, Squires pointed to the willingness of his side to go toe-to-toe with the opposition that reaped so many benefits in the opening 40 minutes.

“We started really well and did everything we needed to do,” he said.

“We played with intensity and got into the physical arm wrestle with them, we completed to a very high standard which helps you win games.

“In the second half, Doncaster came out firing and we couldn’t match their energy – we went away from what we were doing really well in the first half.

“That, along with a few decisions that went against us, meant we came out on the wrong side of the result.”

Sitting eighth in Betfred League One, the Bears are again at home on Sunday, when fourth-placed Hunslet pay a visit to Warwickshire.