Koloydnyski continues to serve up the goods as Rugby march on 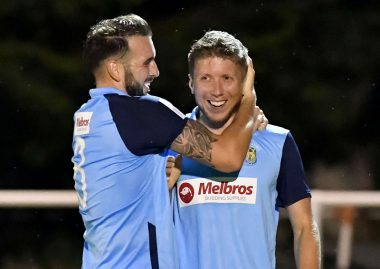 David Kolodynski, right, pictured here celebrating with Barry Fitzharris, has hit prolific form at the start to the season. Picture by Martin Pulley.

VALLEY legend David Kolodynski continued his fine start to the new season by scoring his fourth goal in two games to help inspire Rugby Town to a 2-0 victory at Godmanchester Rovers last weekend.

On an afternoon when Dylan Parker was also on target at Bearscroft Lane, Town recorded their second win in United Counties League Premier South days after a midweek 4-2 rout of Long Buckby.

It was during that goal-laden game under the lights that Kolodynski fired a hat-trick on his return to the club, something which evidently fired up the 32-year-old to net the crucial opener in Rugby’s latest outing.

Following an opening half of several openings but no breakthrough, Rugby’s all-time top goalscorer was the man to deliver once again after tapping in from a matter of yards following Danico Johnson’s left-wing centre minutes into the second half.

And Valley’s fortunes improved with just a quarter of an hour remaining on the clock when Kolodynski sent Keenah Rosser down the left flank, who produced the cross for Parker to touch home the decisive second.

With little time remaining and no fear of a late comeback, Rugby saw out the three points comfortably to go third in the table at this early stage of the season.

With no midweek fixture this time around, all attentions now turn to the FA Cup preliminary round, when Town visit Stone Old Alleynians of the Midland League on Saturday.

League matters then resume with a return to Butlin Road to face GNG Oadby Town on Tuesday.