IT WAS a frustrating afternoon for Rugby Town at Seargeant’s Lawn after falling to a late 2-1 comeback defeat to Rothwell Corinthians.

Caine Elliott had struck ten minutes into the second half to give Valley a priceless lead in a scrappy game and put Carl Adams’ side on course for their sixth win from seven in the United Counties League Premier Division this season.

But after conceding an equaliser 17 minutes from time when Nathaniel Gosnal-Tyler struck, the Corinthians man got in on the act to fire a stunning winner in the dying seconds – with Rugby short handed after substitute Omar Recci spent the final stages in the sin bin. 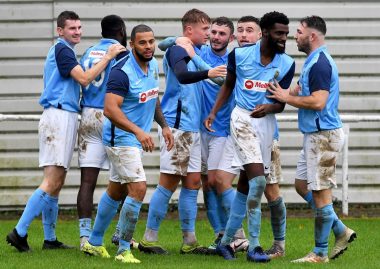 It handed Rugby only a second defeat this term, meaning Adams’ men drop to third in the league and three points behind new leaders Anstey Nomads having played a game more.

An uneventful first half meant there was little to write home about in Northamptonshire, with the game only lit up by Elliott’s opener. 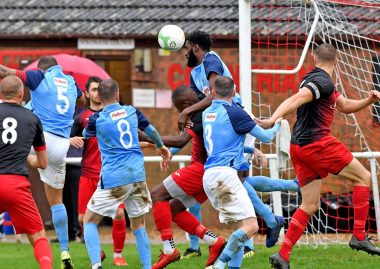 The midfielder flicked into the net after a Ryan Seal free-kick was headed down by Liam Francis, a goal which went according to the script for the table-toppers.

But Rothwell ripped up the narrative, equalising as the game approached the final stages when a half-cleared cross fell to Gosnal-Tyler to blast home.

The Corinthians then took advantage of Rugby’s man disadvantage – following Recci’s sin bin for dissent – when Gosnal-Tyler zipped an excellent strike into the back of Sam Lomax’s net to win it.

With no midweek fixture, Rugby seek to bounce back immediately against Step Six opposition in Saturday’s FA Vase second qualifying round meeting with Ellesmere Rangers at Butlin Road (3pm).