Carl Adams’ side had to dig deep but Tuesday night’s result means only Valley and March Town United have maximum points from the first two matches.

Rugby boss Adams made one change to the team that had started against Cogenhoe, with Edwin Ahenkorah in for Justin Marsden, and in the opening minutes he almost made something of a Luke English long throw as part of a bright start from the visitors. 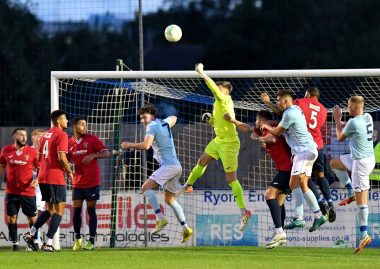 Keeper Matt Hill repels one of many high balls. into the Rugby box. Picture by Martin Pulley.

English then headed Ryan Seal’s corner over the bar, before the right wing-back turned provider again himself when his low, dangerous cross was just cut out by a home defender.

Coventry keeper Scott Martin saved Dan Summerfield’s low strike as Valley continued to press, with the hosts’ best chance coming in the final few minutes of the half when Keenah Rosser made a good clearance at the back post after Callum Martin had found space down the left hand side.

After the restart Summerfield was denied from distance, although Coventry could have easily opened the scoring themselves when Matty Shipman’s attempted lob was thwarted by Rugby keeper Matt Hill.

Caine Elliott’s curling effort nearly broke the deadlock, but Martin turned the ball around the post for a corner with his fingertips.

However, the breakthrough came on 61 minutes. After Seal’s initial free-kick was only half-cleared, Summerfield crossed to the back post for Loyiso Recci to nod the ball onto Kolodynski  and the striker took one touch before firing his snapshot home. 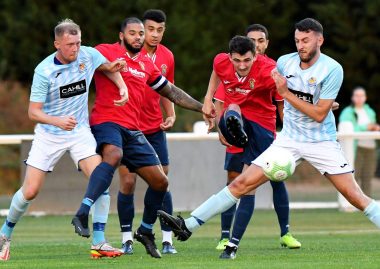 Summerfield fired into the side netting, while Hill blocked a low shot from Shipman with his legs and Guest missed out again with his head after a quick Sphinx corner routine.

Seal had a chance for Rugby’s second near the end when a well-worked move involving at least four of his team mates but his strike was deflected just over the target.