MOTORCYCLE sport fans from all over the world have been paying tribute to a Rugby man who created a phenomenally successful 1,000cc sidecar grasstrack and speedway racing team.

The hugely popular Andy Cossar, the founder and inspiration of the much-revered Cossar Motorsport, passed away recently at Myton Hospice after battling cancer. 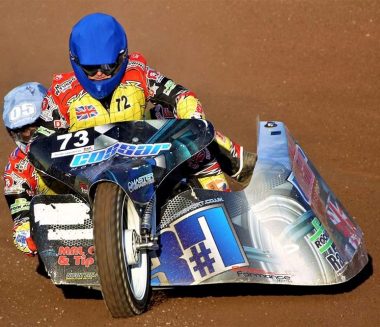 Andy Cossar and passenger Jake Fumarola riding at Leicester in 2019.

Father of multi-British Masters champions Mark and Tom Cossar and their sister Jeni, who competed as a sidecar passenger, Andy’s wife Tracey is also a self-confessed motorbike fanatic, working for the Rugby-based Auto Cycle Union (ACU).

Still competing in the daredevil no-brakes sport last year, Andy was the guiding light for his racing family – always there in the pits with his expert mechanical knowledge, travelling all over the UK, Europe and over to Australia, where sidecar speedway attracts huge numbers of followers.

Speaking from Adelaide, Mick Headland, who won the World Sidecar Speedway Championship at Brandon said: “Here, we are all so very sorry to hear this sad news. Andy was such a nice man.”

Former British Masters champion Paul Whitelam added: “Andy’s presence will be missed by so many of us at grasstrack and speedway. He was a complete gentleman – a pleasure to know.”

Always positive, friendly and generous with his time, Andy was a familiar and enthusiastic face at Rugby Bike Fest. He will be sorely missed.

Tracey Cossar wished to pass on her sincere thanks to Myton Hospice for all their hard work, support and care.