No winning return for the fans at Butts Park Arena 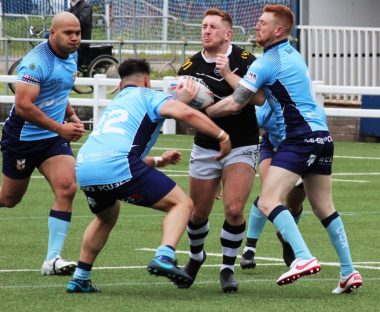 Centre Jack Dawson is engulfed by the opposition. Picture by Craig Cathcart.

RETURNING fans to Butts Park Arena were treated to a spectacle on Sunday afternoon, albeit with Coventry Bears on the losing side, as London Skolars came from behind to secure a 44-26 victory in Betfred League One.

While Richard Squires’ side held a slender 20-18 lead at the break after an impressive opening half, the Bears were unable to capitalise on their opportunities before being subjected to a second-half rally from the emphatic Skolars.

Given the visitors’ previous successes in Coventry, the result may have been inevitable, but there was no such sign of that outcome given the quickfire start made by the hosts.

With just two minutes on the clock, Coventry had their opening try – courtesy of Liam Welham’s darting run over the whitewash following a break through the lines.

In search of a follow-up, the Bears were caught on the back foot and, following a handling error, fell behind when Paulus Latu’s score was converted by Neil Thorman.

Then, on 12 minutes, London went eight points in front as Rich Wilkinson notched the visitors’ second converted try of the afternoon.

The Bears rallied and brought themselves back into contention when mounting pressure resulted in Kieran Sherratt bundling over – albeit with the extras again fluffed by Dan Coates.

Half-back Coates made immediate amends however, finishing off a sensational team move to put Coventry 14-12 up with a converted score.

In a case of deja vu, The Coates Show continued with the 21-year-old’s second maximum score of the game with 13 minutes of the half remaining.

But in a moment that would foreshadow the Skolars’ forthcoming resurgence, Judd Greenhaigh’s determined foray to Coventry’s try line brought the away side within two points of parity a minute before the break.

Squires’ troops remained on top as the second half began, but were ultimately punished for a number of handling errors despite getting into prime scoring positions.

That lack of composure soon came to light, as London went back in front through Jonah Varela’s unconverted finish on 52 minutes.

And though Coates secured a hat-trick just three minutes later to put Bears 26-22 to the good, a 20-minute scoring spree saw off Coventry once and for all.

The Bears return to their home patch once more on Sunday, hosting Rochdale Hornets. 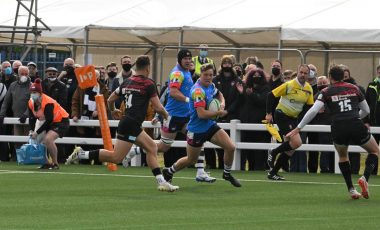 As much as Coventry RFC battled, there was no way past emphatic Saracens on Saturday afternoon. Picture by John Coles.

A DAY earlier, fans packed out Butts Park to witness Coventry Rugby’s heavy RFU Championship defeat to Saracens – in which 11 tries for Mark McCall’s side secured a eye-watering 73-0 triumph.

It means Saracens secured their place in the play-off final with Ealing Trailfinders, while Coventry, fifth, look to finish strongly in their season finale at Richmond on Saturday.