Pre-season preparations ramp up at Valley; Seal gives his thanks to Town 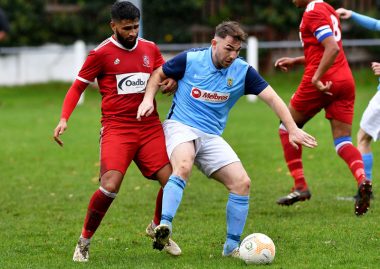 Ryan Seal became a fan favourite during his time at Butlin Road. Picture by Martin Pulley.

PRE-SEASON preparations are well underway at Rugby Town, with Carl Adams confident of his side hitting the ground running when the United Counties League Premier Division South campaign kicks off on August 3.

Valley have been out of action for over six months – last turning out on Boxing Day last year against Northampton ON Chenecks – and as a result have returned early to pre-season training at the beginning of June.

The decision could well prove fruitful as Rugby’s first team squad look to shake off a considerable amount of rust accumulated during the curtailed 2020/21 campaign, ahead of a programme of friendlies to prepare the side before their league opener.

For Adams, it is all systems go on and off the field, as he prepares to add to his existing crop.

“We’ve got the players back in earlier than we normally do to try and get their legs moving again,” he said.

“It’s been a while since we were last together and playing competitively, so we will gradually build up fitness levels once a week for now and then ramp things up in multiple sessions from July.

“Hopefully we will be sharp and raring to go once things get going for real.

“We’re probably losing a few from last season which is disappointing, but these things happen in football and we wish them well with their new endeavours.

“The bulk of last year’s squad are back training with us though – including David Kolodynski who we were only able to get one game out of before things were curtailed.

“Rest assured we will be busy trying to attract new players to the club over the coming weeks and then taking a good look at them in training and the friendlies.”

One man who will not be returning to Town for next season is Ryan Seal, who has joined UCL Premier Division North side Gresley Rovers.

The attacking midfield maestro departs having registered 16 goals in his 25 league games for the club since signing from Stamford, and has placed on record his thanks to the Valley faithful.

“I’ve decided to play my football elsewhere next season, but I just wanted to thank you all from the bottom of my heart for how welcome you made me feel and the support you gave me and the lads over the last couple of years,” said the 31-year-old.

“I’m sorry I couldn’t help this club achieve what we set out to do, but fingers crossed this year you can achieve that goal.”

Rugby are also set to be without goalkeeper Sam Lomax and defender Jamal Clarke, who have put pen-to-paper at Bedworth United, while Caine Elliott could be another face set to leave – having attracted the interest of Southern League outfit Stratford Town.