Red and Greens had to dig deep, says Bradford 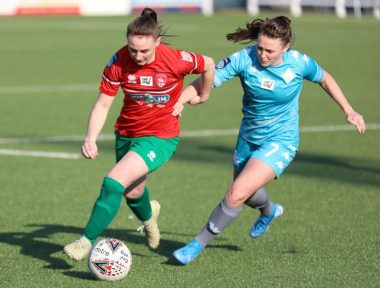 In a shock result, Hayley Crackle’s 25th-minute long-range stunner proved the difference for the Red and Greens, who move off the bottom of the table and out of the relegation zone – two points above London Bees.

And with two games in hand over their rivals, Jay Bradford’s side now have the opportunity to push on in search of points that would cement their place in the second tier of women’s football for a third successive season.

“It was just a graft, every single player and the subs that came on just worked hard, and I think that set us apart,” she said.

“We were willing to contest every single ball, mark players for the duration of the game – that’s let us down at times but I thought we got that spot on.

“It’s been coming, but it’s only been for 45 minutes [in the past], whereas we’ve managed 90 minutes of solid graft.

“We’ve still got to play some really big sides and it’s important that we get business done early so we can go into those games not feeling the pressure that we have been feeling.

“To beat a team like that, where they are in the table, I think shows the confidence the group has got.”