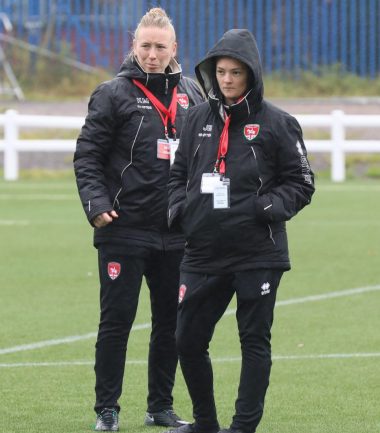 COVENTRY United Ladies manager Jay Bradford says her side are in a good place, ahead of this Sunday’s trip to FA Women’s Championship leaders Leicester City.

The Red and Greens were left reeling after a 5-0 defeat by Liverpool last time out on March 14, a loss which kept them embroiled in the battle against relegation and just two points above rock-bottom London Bees in tenth position.

But having had a week to reflect and reassess since then, Bradford insists her troops are up for the fight this weekend.

“If you watch that game [the defeat to Liverpool], you’ll see we were slightly off the pace compared to the London City game, but we’ve moved on from it, the girls are in a good place and the staff are happy – so it’s been a positive step forward from that game.

“It’s given a little bit of breathing space, but we’re at the point in the season where it doesn’t really matter, those games are going to come and you’re going to have to play them.

“A week off is nice because it’s given everyone time to reflect and have a bit of down time, but it also prolongs the process so I’d rather get playing, get the next result and see what happens.

“But that’s not the way the league works, there’s a lot of stop-starting, and I think we’re getting accustomed to that now.”

And with a blockbuster trip to Super League side Birmingham City on the cards in just under a month’s time for the FA Women’s Cup fourth round, all attention is solely on the next game for the Coventry United Ladies manager.

“I’ve got a one game at a time mentality, but it’s in our longer term planning with our staff, I haven’t discussed it with the players as of yet.

“But as far as I’m concerned the most important thing for me is the next game, and that’s Leicester.”