ELEVEN goals in Rugby Town’s opening two games mean that the start to the United Counties League Premier Division season could hardly have gone much better for Carl Adams and co. 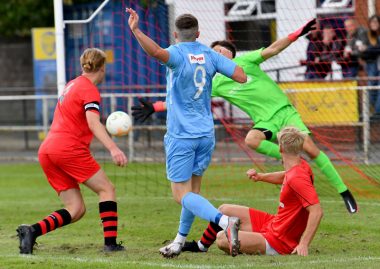 Dylan Parker drives one inside the post. Picture by Martin Pulley.

Following a 6-0 thumping of Pinchbeck United in Saturday’s curtain raiser at Sir Halley Stewart Field, an equally impressive 5-1 rout of Cogenhoe United on Tuesday night, helped by four from the imperious Dylan Parker, showed that Valley really do mean business.

Topping the table at this early stage means nothing in the long run, but if Rugby continue to go on in the fashion that they have started then it could well be a season to remember.

For manager Adams, it is an early sign that his team are fully prepared for whatever comes their way in the next few months.

“It’s great to get off to such a flier but we know how testing the next few games will be for us,” he said.

“We had a series of tough fixtures near the start of last season too and we didn’t pick up as many points as I would have liked, but the situation was different then as we were bedding in a number of new players.

“This time round we have the continuity of virtually the same squad that we ended last season with and we’ve played well and just banged in eleven goals, so hopefully we can take advantage of this good early form.”

Just one change was made to his side in midweek for the first league fixture of the campaign at Butlin Road, with Justin Marsden replacing the unavailable Lee Thomas to slot into his familiar holding midfield role.

Parker needed little time to get up and running and had his first of the game around the 15-minute mark when meeting Danico Johnson’s centre, swivelling on the ball and then lashing a venomous shot low into the corner.

While the visitors from Northamptonshire restored parity midway through the half following Nat Ansu’s solo effort, it was quite simply the ‘Parker Show’ after the restart.

An early penalty award allowed him to double his, and Rugby’s, tally with consummate ease after Charlie Evans was felled inside Cogenhoe’s box.

And just minutes later he had his hat-trick, lashing home a speculative effort following Caine Elliott’s lay off.

The man with the golden touch supplied yet another moment of magic to put Town out of sight on the hour mark, slipping a low drive inside the post from the edge of the area.

Liam Francis then added to his two-goal salvo from the weekend to make it three for the season and wrap up the scoring with minutes remaining.

The 30-year-old was well placed to flick a header goalwards past the goalkeeper and then tap home after picking up on a loose ball.

Hitting Pinchbeck United for six just three days beforehand was the perfect demonstration to Adams that Rugby had blown away the cobwebs from their early FA Cup knockout by Worcester City.

A treble of braces for Francis, Johnson and Parker – five of which arrived in a whirlwind first half – gave a good indication of the willingness for players throughout the team to chip in with the goals.

Francis needed only three minutes to open the scoring with a thumping header from Johnson’s corner, followed four minutes later when Parker finished from Evans’ set-up.

After just 23 minutes played the game was effectively already over when Francis capped off a surging run upfield by finishing expertly after receiving from Parker’s one-two.

Johnson’s quickfire double in the 35th and 38th minute put the visitors at further ease, zipping a shot into the corner with his first and then blasting a ferocious strike into the roof of the net with his second.

While Pinchbeck offered some resistance after the break, there was never any real threat to Sam Lomax’s goal.

So it should have come to no surprise that the sixth and final goal of the afternoon also went Rugby’s way, this time Parker the man to wrap up his brace by tapping in Lee Thomas’ cross.

Away trips to Loughborough University on Saturday (3pm) and Shepshed Dynamo on Tuesday (7.45pm) are sure to provide sterner tests having also both won their two openers, joining Rugby at the top of the tree in doing so.