Stewart: Norwegian duo have instantly made Blaze a tougher nut to crack 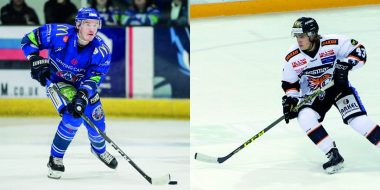 Nicolai Bryhnisveen, left, and Max Krogdahl, right, have both made the move from Norway’s Eliteserien. Pictures: Scott Wiggins and Finn Erikson.

BLAZE head coach Danny Stewart says his side will immediately be strengthened by the defensive acquisitions of Norwegian duo Max Krogdahl and Nicolai Bryhnisveen, ahead of next month’s Elite Series.

Bryhnisveen is a familiar name to Coventry fans given his spell at the club during the 2018/19 campaign, when he racked up 47 points in 68 appearances in all competitions – a record which earned him the club’s Defenceman of the Year title, in addition to goal of the season.

The 29-year-old returns from a two-year stint at Stavanger Oilers, whilst Krogdahl arrives from Frisk Asker having become a regular fixture of a side which operates in Norway’s top-tier Eliteserien.

In five years playing professionally, the 22-year-old accumulated 197 appearances in both regular season and play-off matches, and is renowned for his physical but reliable approach to defending.

And as far as current international pedigree is concerned, Krogdahl has been recognised for his performances in his homeland and has been included in the Norway preliminary squad for this year’s World Championship in May.

Stewart is confident the pair can hit the ground running, and said: “We are getting a pair of defencemen that will immediately make us better – both players come from top teams in Norway and both have national team experience.

“We know Nico very well, he skates so well and plays up and down the ice as well as anyone.

“Max is a big, physical defenceman that competes hard and is tough to play against, and will partner well with Nico.”

Coventry will play 12 regular season games against Manchester Storm, Sheffield Steelers and Nottingham Panthers, in a condensed Elite Series held at the National Ice Centre in Nottingham, with the play-offs taking place at the end of April heading into May.