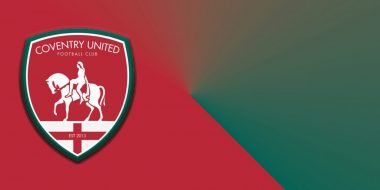 COVENTRY United chairman Joe Haggarty says the future of the club will remain bright – despite the Red and Green’s Midland League Premier Division campaign being curtailed.

An announcement by the Football Association last week confirmed the worst fears of most clubs at Steps Three to Six of the non-league ladder, with the 2020/21 season being drawn to an immediate close.

As it stands, the debate continues to rumble on as to whether promotions and relegations will be permitted, with many – including Haggarty – calling for a combination of results from the 2019/20 and 2020/21 seasons.

“To say I’m disappointed with the decision is an understatement,” he said.

“Of course, the health and safety of players, staff, officials and fans must come first.

“However, we believe disregarding the hard work of, not just ourselves, but every Midland League club, is a grave injustice to those who have worked tirelessly to keep football going under the most difficult of circumstances.

“One of the potential ways to end the campaign was to combine the previous two seasons, resulting in a combined points total and standings decided on a points-per-game basis.

“This would have seen Coventry United finish second in the Midland League Premier Division and the potential for promotion to Step Four of the non-league pyramid, which would have been a much fairer representation of the past two years of graft.”

But in spite of the disappointing outcome in regards to the current season, the United chairman is confident that the club can continue their upward momentum going forward.

“All we can do now is regroup, rearm and restart in August with new faces, new ideas and a new standard both on and off the pitch,” Haggarty continued.

“The club has taken huge strides to become the outfit you see today, but the Red and Green revolution is only just beginning.

“We harbour great hopes for the next campaign, especially for the return of the Red and Green army who have been so greatly missed at Butts Park Arena.

“While we take pride in our past, we always look to the future. The youth system has been a huge part of the club’s history and we hope will continue to be so.

“We invite all members of the Coventry United youth teams and their families to join us once football is back under way, to affirm the link between the current and future stars of our club.”