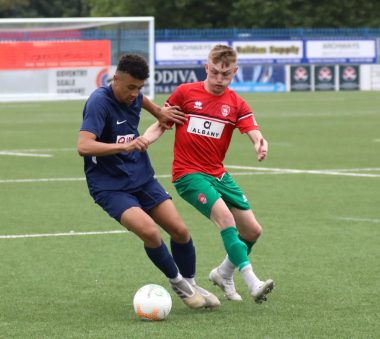 Josh Thomas, left, keeps a close eye on the ball under pressure. Pictures by Martin Pulley.

A FIRST defeat in United Counties League Premier Division South this term was suffered by Rugby Town at the hands of fellow promotion hopefuls Coventry United on Bank Holiday Monday, going down to a 3-1 defeat at Butts Park Arena.

In what was a fast start to the encounter, United showed their attacking prowess with a couple of half-chances before Kyle Carey’s centre put the ball on a plate for Cairns to rifle home past Ben Newey.

If the move to set up the opening goal was admirable, then Fitzharris’ equaliser moments later was even more eye-catching.

Finding himself on the ball, the midfielder saw an opening in Reece Francis’ goal and picked out the bottom corner with deadly accuracy, levelling from no more than 25 yards out.

But from there, Town had their backs to the wall and held firm under intense scrutiny from the hosts.

While a Charlie Faulkner header failed to get the better of the Rugby shot-stopper, a Riley O’Sullivan flick from Carey’s cross had to be clawed off the goal line by Newey to ensure parity. 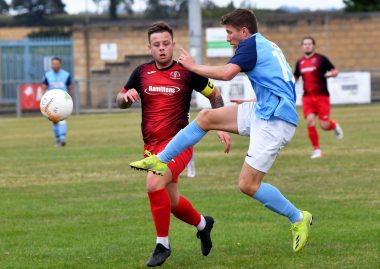 Coventry, for all of their endeavour, may have been forgiven for going in at the break with heads bowed having been denied on numerous occasions, but Faulkner was clearly in no mood to show the visitors any mercy – whipping a fierce strike into the bottom corner to give United the crucial half-time advantage.

A more subdued second half followed as both sides failed to string together any real chances of note, until a first United goal for Soleman killed off the game.

Finding himself clean through, Soleman latched onto a Ben Vallance pass to finish clinically with three minutes to play.

It provided Valley with contrasting emotions to a 3-2 win over Rothwell Corinthians two days earlier, when two goals from David Kolodynski either side of the break and a Justin Marsden tap-in helped edge the visitors from Northamptonshire.

Third in the table, Rugby visit Wellingborough Town, 12th, next.