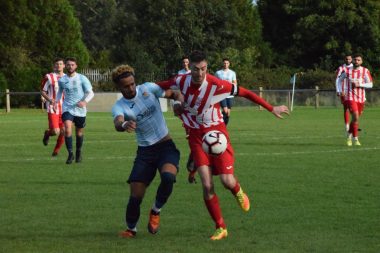 THE JOY of Coventry Sphinx’s FA Vase progression was quickly quashed by defeat to Romulus in the Midland League Premier Division on Monday night.

Sphinx went down 2-0 to the Roms after conceding twice in the second half, James Bryson scoring an unfortunate own goal and substitute Jarrell Hylton making the points safe for the Castle Vale Stadium hosts, just a couple of days after Sphinx had earned a place in the first round of the Vase.

The 2-0 success over Shifnal Town at Sphinx Drive, courtesy of a Jamal Adams brace, earned Coventry a home tie against Heanor Town on Saturday, October 31, although all focus will turn to fixing their latest defeat when hosting Lye Town on Saturday (3pm).

Division rivals Coventry United were involved in an eight-goal thriller in a friendly encounter with a Nuneaton Borough trialists side.

With both teams out of competitive action, Saturday’s goal show proved a real confidence-booster for Terry Anderson’s side in the lead up to tonight’s clash with Worcester City at Butts Park Arena (7.45pm).

Considering that United led three times in the encounter and were set to win until Nuneaton’s equaliser four minutes from time against higher-level opposition, the exercise can be seen as a highly beneficial one for Coventry.

After falling a goal behind after seven minutes, Josh O’Grady’s double turned the tide for the visitors at Liberty Way.

With Nuneaton netting their first equaliser, Kevin Thornton restored Coventry’s lead just after the hour mark, before the scores were again levelled with 15 minutes remaining.

Joe Cairns looked to have won it with eight minutes to play, although United were ultimately unable to hold on.

On Saturday, United host Haughmond (3pm), prior to a third successive home league game against Newark on Wednesday, 21 (7.45pm).

GNP Sports fell to a fourth consecutive defeat on Saturday, going down 2-1 at Gresley Rovers to exit the FA Vase at the second qualifying round.

The Division One basement boys were unable to recover from quickfire first half strikes from David Kolodynski and Daniel Munday – James Taylor’s goal proving a mere consolation.

Positive COVID-19 tests ruled Wednesday night’s league clash with Ashby Ivanhoe unplayable, meaning GNP will be out of action until a trip to Hinckley AFC on Saturday, October 24.

While Coventry Copsewood were out of action last weekend, they host Cadbury Athletic in tonight’s fixture at Allard Way in a 7.15pm kick-off.

An Alex Andrews double was unable to inspire Coventry Alvis to victory after a late Hampton winner resulted in a 3-2 defeat at Green Lane on Saturday.

The Division Two clash went the way of the visitors, who took the lead through Darrell Francis before falling behind to Andrews’ two-goal salvo.

Thomas Craine levelled things up with 20 minutes to play, prior to Collins Ajayi’s 94th-minute decider.

Kenilworth Sporting were derby day victors over Coventrians in Division Three, walking away with the three points and their 100 per cent start to the season intact, following an enthralling 4-3 contest at Gypsy Lane.

Coventrians did not make it easy for their hosts, however, going two goals in front through Jeremie Agholor and Nathan McGarrity inside the opening half hour.

A strike from Tyrone Wilson reduced the arrears going into the break – a key turning point that set the stage for a rollercoaster second half.

Wilson was the man to level once more on the hour mark, before putting Sporting in front seconds later with his hat-trick goal.

While Joel Heeley sparked scenes of ecstasy for the visitors with his leveller five minutes from time, it was Tom Sharpe who decided the tie late in stoppage time.

On Saturday, Kenilworth visit Upton Town (3pm), while Coventrians have a free weekend.

Fola Fagbemi struck a hat-trick at Mitchell Avenue, adding to goals from Joe Gardner and Jordan Powell, with Rangers aiming to extend their record at home to Gresley Rovers Reserves on Saturday (3pm).

Good Evans for Rugby after hat-trick show in the Vase