OPENING DAY delight was in store for Coventry United as their Midland League Premier Division campaign got underway with a narrow 2-1 victory over Heather St Johns. 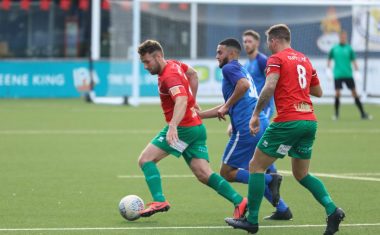 Josh O’Grady turns away from his marker. Picture by Jeff Bennett.

Kyle Carey’s early strike set the tone for the afternoon at Butts Park Arena, giving the Red and Greens a lead that was doubled ten minutes into the second half by substitute Joe Cairns.

And while a fellow substitute in Jake McLeary pulled a goal back for Heather with 12 minutes to play, Terry Anderson’s side had enough in the tank to secure three points.

Carey’s second-minute drive low into the corner was the perfect way to give United’s season lift-off, after which the contest developed into an end-to-end affair that seemed destined for goals.

While the net at either end failed to ripple for the remainder of the half, Cairns’ composed finish after the restart put Coventry on track for a straightforward win. 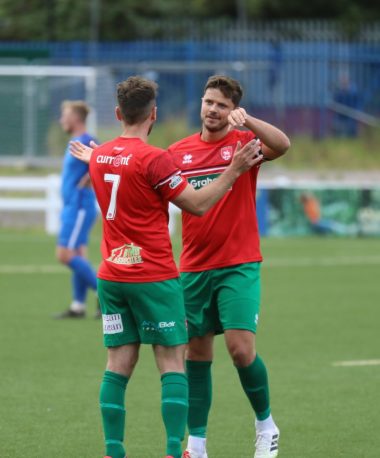 But for all of the hosts’ endeavour to kill off the game with a third, they were unable to find it and were punished when McLeary struck with the visitors’ first attempt of the half.

United were scheduled to take on Newark Flowserve on Wednesday, a fixture that has been postponed after a player and staff member demonstrated COVID-19 symptoms.

Instead, pending the return of negative results from the entirety of the playing and backroom staff, Evesham United will be next up at the Spiers and Hartwell Jubilee Stadium in Saturday’s FA Cup preliminary-round tie (3pm).

A SIMILAR incident prevented Coventry Sphinx from getting up and running after reports of COVID-19 symptoms amongst Selston’s squad.

Shaun Thomas and John Woodward will have their fingers crossed for Saturday’s FA Cup tie against Coleshill Town at Sphinx Drive (3pm) goes without incident.

GNP Sports strode to a straightforward 2-0 win away to promotion favourites Uttoxeter Town in Division One thanks to strikes from Ryan Murphy and Jack Hilton.

Murphy broke the deadlock seven minutes after the restart to give Shamir Alam’s side the advantage in Saturday’s game at Oldfields Sports Ground.

Then with five minutes to go, Hilton made sure of the points to provide some momentum ahead of Wednesday night’s trip to Lichfield City (7.45pm).

THE GOALS were flying in in Coventry Copsewood’s opener at Brocton in a 3-3 thriller at Silkmore Lane.

Dave Freeman and Sean Kavanagh gave Copsewood a 2-1 lead at the break, although Jack Weldon’s reply gave the hosts some hope.

So the second-half comeback that followed, prompted by goals from Adam Weldon and Jake Thomas, had the visitors sweating.

Liam Stringer came to the rescue with an equaliser, but it will be a question of what could have been for manager Darren Dickson on his return to action in the Copsewood dugout.

Coventry are faced with consecutive away games, starting with Tuesday night’s contest at Stapenhill (7.45pm), followed by a clash with Leicester Road on Saturday (3pm).

JORDAN McKenzie’s stoppage-time winner was a crushing blow for Coventry Alvis in finishing on the losing side of a 5-4 scoreline at Earlswood Town.

The Division Two thriller had it all, with a red card for the Earls and Coventry twice restoring parity from a losing position at The Pavillions.

Adam Bourn gave Alvis a 15th-minute lead after capitalising on poor defensive play at a corner, though McKenzie scored his first of the day to level seconds later.

Two more strikes followed for Town before the half was out, as Joel Hughes struck twice in the space of seven minutes to leave the visitors floundering.

But Jamie Burkacki’s charges had an ace up their sleeves with a quickfire two-goal salvo of their own to get themselves back level.

Dildale Linton finished clinically from a corner played low in the 55th minute, followed by one from super-sub Kier Mallen eight minutes later.

Earls refused to be downed by the hammer blow and regained the lead after a Hughes header was tipped onto the bar, but the rebound falling only as far as Harry Street to touch home.

A second yellow for Joseph Wright and a second Alvis equaliser from another substitute Nathan Stoute meant it was game on again.

But with the clock winding down and both sides going all out for victory, a 25-yard free-kick awarded to the hosts in the third minute of stoppage time was all the invitation needed for McKenzie to lash home the decider.

Alvis hope to issue a response at home to Knowle on Wednesday evening (7.30pm), followed by another match on home soil against Alcester Town this Saturday (3pm).

HAT-TRICK heroes Jeremie Agholor and Lewis Chester were on fire as they helped Coventrians brush aside Leamington Hibernian in a 7-2 rout in Division Three.

It was in fact Kieron Butler who got the ball rolling for the hosts at Colliery Sports Ground, before Agholor and Chester set about tearing up the opposition with quickfire braces to build a commanding lead.

While Hibernian’s Curtis Cutts did pull one back from the spot, Coventrians’ lead never looked in danger of being overturned after the break – even with Jordan Featherstone issuing a second consolation at the beginning of the second half.

Chester was first to settle his hat-trick, before Agholor followed suit to leave the pair fighting over the match ball at full-time.

On Saturday, Coventrians head to FC Shush hoping to enact defeat on a side which were taken apart in a 6-1 mauling by Inkberrow on their first outing of the season (3pm).

NEWLY-RENAMED Kenilworth Sporting had Luke Steer to thank for driving them to victory with a hat-trick in an impressive 5-0 win at WLV Sport.

Martin Ascroft’s side, previously known as Coventry Plumbing before their rebrand in the off-season, showed no teething problems and set about their business in ruthless fashion from the start.

It took just 12 minutes for Steer to direct a shot into the net and get Sporting up and running, albeit with the only goal of the half.

Then, with Ascroft delivering his first half-time team talk of the campaign, the goals really started to fly.

Steer grabbed his second 11 minutes after the restart, before Tyrone Wilson got in on the action in the 65th minute.

Archie Ascroft delighted his new manager with Kenilworth’s fourth of the afternoon four minutes later, before Steer completed his goal show two minutes before the end.

Kenilworth are next tasked with an away day at Tamworth Academy on Friday night (7.45pm).