It sealed an 11th win from 11 fixtures for the table-toppers, and also a fifth clean sheet on the bounce and that according to management is the key to the success.

Again it was a slow start by the Borough allowing Khalsa to dominate possession and some early work for 16-year-old Max Alford who made his debut in goal after some game time and impressing in the reserves.

However, it was Borough who took the lead on 15 minutes,Dale Linton heading home an Ashley Piper cross. 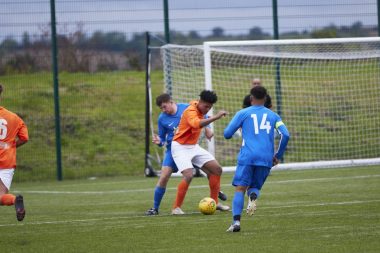 Linton then missed a tap-in following some decent work from Halim Halin and it was Halim who increased the lead on 25 minutes, skipping round two defenders on the edge of the box and firing home.

Tommy Glasscoe popped up to score Borough’s third on 30 minutes, Halim and Piper combining to put the skipper through and he fired high into the net. 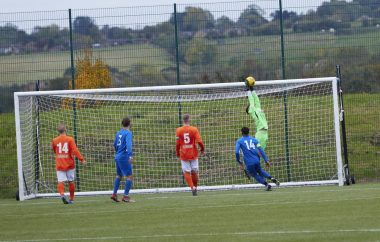 Maxl Alford claims the ball on his debut.

The second half was a real non-event with both teams huffing and puffing but not creating any real chances.

Ashley Piper wasted a glaring chance after beating the offside trap and the keeper, only to put the ball wide with the goal wide open.

But, 10 minutes from time, Piper made up for the miss scoring from close range to secure another 3 points

On Saturday Borough visit Blaby and Whetstone in a league match, KO 3pm.

Borough have drawn North Kilworth at home in the league cup and visit Stockton in the Coventry Charity Cup. Borough are the current holders after beating Alvis at the renamed Coventry Building Society Arena two years ago.

From the first whistle Borough had control of the game, with Whiteside testing the Desford keeper on a number of occasions

Borough finally opened the scoring through Whiteside’s cool finish before he added a second after Sam Brake’s inch-perfect pass.

The second half continued in the same way with Borough having chance after chance.

But they were dealt a setback after being reduced to nine men after Leigh Odell brought a Desford player down and much to everyone’s disbelief was shown a red card. Whiteside found himself in the sin bin after questioning the referee’s decision.

After Whiteside returned to the pitch he was upended in the box, Whiteside took the penalty which was saved but slotted the rebound home to complete his hat-trick.

Borough’s perfect defensive display deserved nothing less than a clean sheet which never looked in doubt. Man of the match went to skipper Tom Ford.

Rugby Borough’s women were 3-1 winners against Rugby Town, thanks to goals from Em Davies, Beth Fesel and Michelle Oldfield. 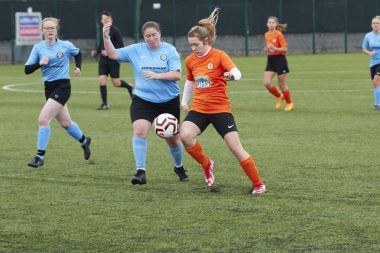 Emily Davies, right, battles for possession in the derby against Rugby Town.

The first half consisted of plenty of chance for Borough and Davies scored the opener by firing in the top corner. 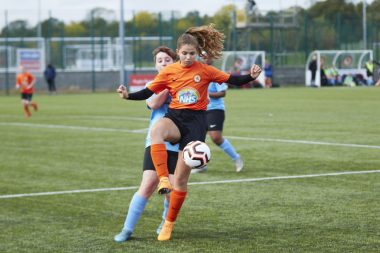 Sydnee Lowe in action for Rugby Borough against Town.

Town battled to restore parity but Oldfield broke through for Borough’s third.

Next game is at home to Droitwich Spa, 2pm KO