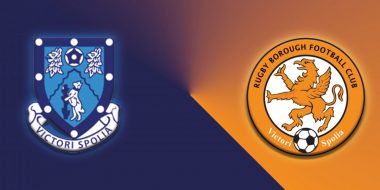 BOTH of Rugby’s leading football sides are set for another extended spell without match action in the wake of Monday night’s third national lockdown announcement.

With new restrictions preventing football at Step Three and below of the non-league ladder from recommencing – including training – both Rugby Town and Rugby Borough are awaiting further clarification from their respective leagues on a possible restart date.

Carl Adams’ Valley, who play in Step Five’s United Counties Premier Division, have been on the promotion chase again this term – as have Jamie Tank and Dan Elliot’s Borough side in the Leicestershire Senior Premier Division at Step Seven.

But with both leagues still at a formative stage of the season, and taking into consideration the earliest date for the forthcoming lockdown to end being in mid-February, and the question of whether non-league football below the National League North/South will restart at all becomes a serious one.

Both Town and Borough suffered the heartache of having their respective league campaigns abandoned last season, something which may well prove the case once again when considering the congested backlog of fixtures currently facing the majority of non-league outfits.