Valley's Recci right on the money with late penalty 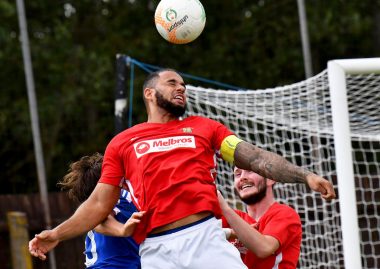 Helping atone for a 4-2 FA Cup preliminary qualifying round defeat at Midland League side Stone Old Alleynians last weekend, Valley gritted their teeth in midweek to earn a third three-point haul this term at Butlin Road.

Having momentarily been a man light as a result of Justin Marsden’s sin-binning in the first half, Town made progress as the game wore on and eventually gave themselves the perfect opportunity to break the deadlock.

Duly dispatching from the spot, Rugby skipper Recci sent the ball straight down the middle after Danico Johnson was fouled to earn another crucial win at this early stage of the season.

It was a far cry from Saturday’s sorry downfall at Hilderstone Road, where Valley lost sight of their sixth-minute lead to go in 3-1 down at the break.

Having gone ahead through Dylan Parker, the trio of Jack Tomlinson, Lucas Baker and Sam Wilson all netted before the half was out to stun the visitors.

And though Parker was again on target on the hour mark, a Sam Bowater follow-up goal ended Rugby’s FA Cup aspirations for this term.