Laura Turton and Hannah Maclachlan from Southam College decided during lockdown that, as they couldn’t participate in the school’s annual 24-hour charity event, they would create their own.

And Laura decided it would be a great opportunity to raise money for her friend Rebecca’s son Ronnie Shore, who developed cerebral palsy due to being born prematurely at 28 weeks.

Ronnie’s condition means he needs specialist therapy to help train his body to do what comes naturally to most toddlers – roll, sit, crawl, walk, speak and swallow – so is fully reliant on parents Rebecca and Joe.

But time is of the essence, as the ‘fight for Ronnie’s brain’ will become less effective the older he gets – so with help from charity Just4Children, Rebecca and Joe launched the Remarkable Ronnie appeal to raise £20,000 for intensive therapy which is not available on the NHS.

Laura and Hannah set themselves a target of running one mile every hour on the hour from 9am-8am – and an additional challenge of covering the distance of a marathon, 26.2miles.

Laura said: “We chose to support Ronnie as its a story that is close to home – I played netball with Rebecca for two years at University.

“We wanted a physical challenge while on the summer holidays, and thought why not tie it in with a fantastic cause.

“When I proposed the challenge and charity, Hannah fell in love with the story and the idea – maybe not the distance!”

The pair were joined by many friends and colleagues at various stages of the challenge – and were even cheered on by Ronnie himself.

“The best run was the 11th where we were joined by our friend Lottie and, most importantly, Rebecca.

“At the end of the 11th run, Ronnie and his dad Joe waited and cheered us on as we finished, reminding us girls why we were doing this challenge in the first place.”

The runs continued through the night, with a final push in the 24th run at 8am to round their total distance up to 26.4 miles, exceeding their second target of a marathon.

Laura said: “It was a fantastic and extremely difficult challenge both physically and mentally, but well worth it to improve the quality of a little boy’s life.” 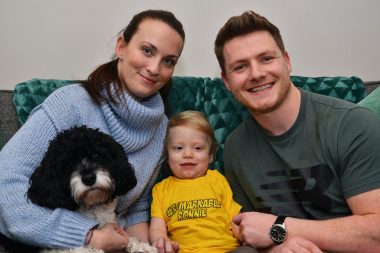 Ronnie with parents Rebecca and Joe, and dog Digby.

Joe said: “It feels incredible that so many people want to help Ronnie. We’ve been overwhelmed at the support we’ve received.”

He told The Observer that Ronnie’s bright personality has helped him and Rebecca to stay positive.

He said: “He is an absolute sweetheart! Despite his challenges, he is a happy little boy. He has a cheeky side and loves cuddles and tickles.

“Ronnie brightens up everyone’s day with his cheeky grin. People see how hard he tries and are influenced by how brave he is.

“He has been determined since day one, and works so hard during his physio and therapy despite how exhausting it is for him.

“Seeing him develop in recent months is awe-inspiring for us and we couldn’t be prouder.”

He said Ronnie needed treatment as soon as possible because his body’s potential will give up on him the older he gets.

“That’s why it is so important for us to strike now and get Ronnie the treatment he needs and deserves to live a full life, one of happiness and independence.

“It’s a fight for Ronnie’s brain. Our remarkable boy is improving and he has so much potential – its just a case of unlocking it.

“Our son is the most amazing little soul! The sky is the limit for our fighter, and helping Remarkable Ronnie to reach his potential would be the most immense gift we could ever give him.”

Laura and Hannah have so far raised nearly £2,000 – ten times their initial target. Visit https://www.justgiving.com/fundraising/laura-and-han-24miles to add to their total, or www.justgiving.com/campaign/RemarkableRonnie to donate directly to the Remarkable Ronnnie appeal.