Valley had taken an early lead through Luke English, before the visitors turned the UCL Premier Division game on its head by scoring twice themselves within the opening 20 minutes, and the eventful first half continued when Desborough keeper Chris Jones was dismissed, with James Hancocks pulling Rugby level just before the interval.

It then looked as if the Northamptonshire club were going to hold on for a point, until Kolodynski netted twice in the closing minutes.

Valley boss Carl Adams made three changes from the comfortable victory at Peterborough the following week, with new keeper signing Matt White in between the sticks, and Omar Recci and Keenah Rosser also back in the starting line-up.

English’s second-minute opener was a beauty, as he curled the ball beyond Jones from the edge of the area after Kolodynski had set him up.

White was soon in the action though, when punching away Jack Empson’s swerving shot for a corner.

From the resulting set-piece delivery, Desborough skipper Aaron Davis was on hand to loop the ball beyond the debuting keeper and into the top corner of the net for the equaliser.

Town responded well to the setback, though, and both Kolodynski and Max Johnson sent strikes wide of the target – the latter coming from a free-kick after Jones was booked for bringing down Edwin Ahenkorah just outside the box. 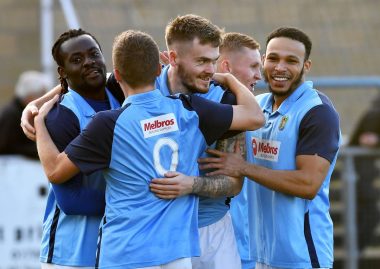 Luke English is congratulated by his Valley team-mates after firing the opening goal against Desborough. Picture by Martin Pulley.

English dragged another attempt on goal wide, before the visitors edged themselves ahead when Brooklyn Biddle beat White to a ball down the channel and found Barnes Gladman to stroke home into the empty net.

Again Rugby reacted quickly, and Kolodynski should have finished off an Ahenkorah cross, and then both Loyiso Recci and Kolodynski somehow could not force the ball home after a goalmouth scramble.

The chances continued to come Valley’s way, with Johnson denied by a decent block by Jones and Kolodynski again smothered out at close quarters. 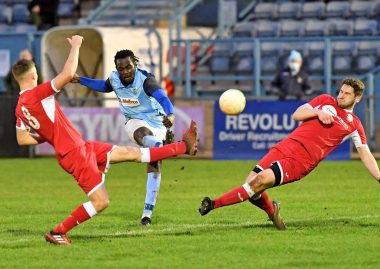 Edwin Ahenkorah gets a shot at the Desborough goal. Picture by Martin Pulley.

However, Desborough were then reduced to ten men, when Jones received his second yellow of the half following a multi-player melee in the six yard box, which meant that scorer Davis had to don the gloves instead.

Hancocks levelled things up on 42 minutes when his whipped free-kick from distance took a small deflection and flew past the stand-in the stopper.

There was still time in the half for Kolodynski to be twice more by a goal-line block and a Davis save, and the new period continued in the same vein with Town camped in the opposition’s half for long periods.

Despite their dominance, Rugby failed to overly trouble Davis though, and were too often guilty of snatching at shots and/or failing to hit the target with them.

Ahenkorah and Hancocks both blazed way over, whilst Davis did make a couple of decent stop to a subsequent strike from Hancocks, and he also blocked a Recci effort with his legs.

Johnson then almost forced home a Recci cross to the far post, with Kolodynski also firing wide on the turn. 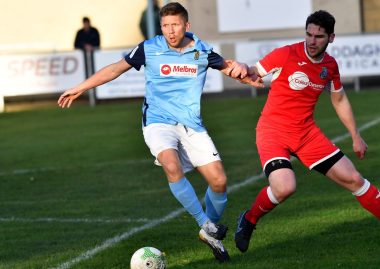 Two-goal hero David Kolodynski on the ball against Desborough. Picture by Martin Pulley.

With time appearing to be running out, Valley finally got their goal on 88 minutes when sub Owen Bennett’s perfectly flighted cross from the left was met by the head of Kolodynski, and then the striker added a fourth in stoppage time when he ran onto an upfield clearance to flick the ball over the advancing Davis.